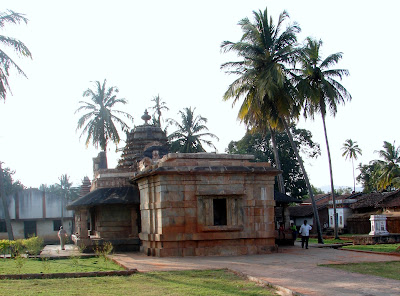 "Works of art indeed are not made entirely at random from inspiration; there are almost always discoverable some methods, principles and irrevocable canonical rules. Whatever may be the originality of a work, it is connected with contemporary works; it is explained by anterior works. The author belongs to a school, the work belongs to a style"
- Dr. Jaouveau-Dubreuil in Dravidian Architecture

Temple architecture in South India
The temple architecture that started in South India was generally classified into groups according to the names of the dynasties of kings. It is usually said that the Pallava period (AD 600-AD 850) is that of sculptured rock, the early Chola period (AD 850-AD 1100) that of grand Vimanas, the later Chola and Imperial Pandya period (AD 1100-AD 1350) that of the most beautiful gopuras and of the Vijaynagar period (AD 1350-AD 1600) that of mantapas and pillared halls and the Nayak period as also the modern period after 1600 as that of corridors.

The Architecture of Karnataka can be traced to 345 AD with that of the Kadamba Dynasty. The Kadambas were the originators of the Karnataka architecture. Kadamba's architecture and sculpture contributed to the foundation of Chalukya-Hoysala style. Vijayanagara architecture is a vibrant combination of the Chalukya, Hoysala, Pandya and Chola styles, idioms that prospered in previous centuries

The most prominent feature of Kadamba architecture is the Shikara(tower), also called Kadamba Shikara. The pyramid shaped shikara rises in steps without any decoration and is crowned with a Kalasha on the top. Occasionally the pyramids had perforated screen windows.

Kadamba temples were an improvement on the Andhrabhritya structures. The latter we may presume, were like all ancient monuments, mere halls, as yet not separated into partitions. With the rise of the Kadambas, however, the temples came to consist of two distinct parts, namely the garbhariha and the sukanasi. 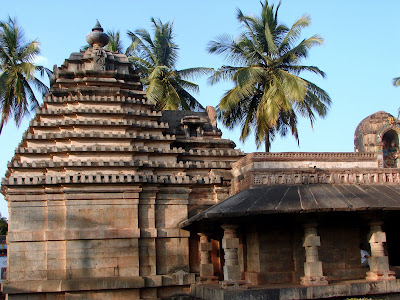 A popular legend narrates that the Pandavas, while in exile, built Narasimha temple overnight at Halasi to worship Lord Vishnu.

Historically, the temple has been dated to 5th century AD when the Kadamba ruler Shivachitta were ruling over this region. Inscriptions inside the temple also support this.

The Varaha-Narasimha temple at Halasi shows further evolution in Kadamba architecture. The parallelopipeds in the stages of the tower are here more numerous than in several other temples. But as these stages are not so minutely divided or marked with profusion of ornamentation as in the later temples, the vigorous and purposeful lines of the tower are still maintained. The tower is arranged in eleven tiers. On the 10th tier there are four panels each crowned by a kirtimukha, or the grotesque face of a monster, apparently a lion. 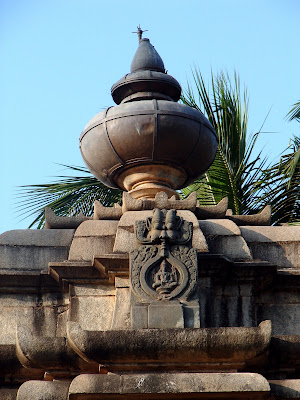 The sukanasi which is surrounded by walls is lighted by pierced stone windows inserted above the overhanging eaves. Unlike the earlier Kadamba temples that have one window, Bhoovaraha Narasimha temple has three windows. 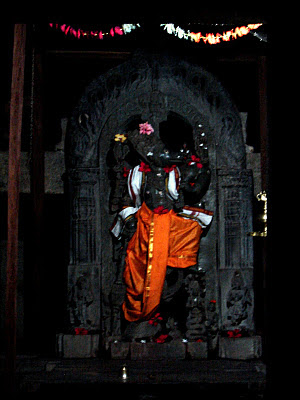 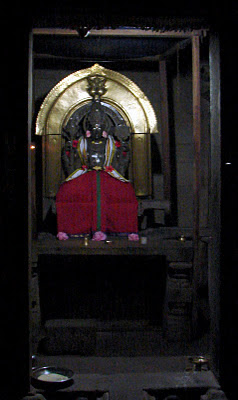 Originally, the temple had only one Garbhagriha where a crude idol of Narasimha having two hands was installed. It was later replaced with a seated Narayana. This shrine has a shikara built in the Kadamba-Nagara style which was renovated later.

A second garbhagriha facing the first, was added to the temple several centuries later. Vijayaditya III installed a 5 feet standing idol of Varaha carrying Mother Earth (or Bhoodevi) in his mouth in 1186-87 AD.
Posted by Casey at 10:08 PM