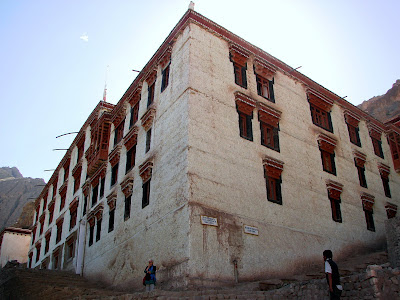 Cradled in a beautiful valley and surrounded by streams is the 17C Hemis monastery below the famous cave of Gotsangpa and the Gotsang retreat center.

The monastery holds the distinction of being the biggest as well as the wealthiest monastery of Ladakh. Since the monastery was built hidden in a valley, it was never found by invaders. Also, the farmers of Hemis give a part of their harvest to the monastery. 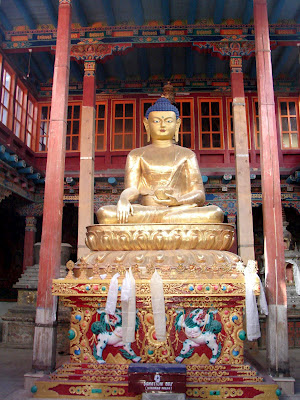 The monastery is divided into two parts - assembly hall and the main temple (Tshogkhang). The historic temple Du-Khang houses the throne of the Rinpoche and the other historic temple Tshogs-Khang has a huge guilded statue of the Sakyamuni Buddha decorated with semi precious stones. The balcony is well garnished with fresco pictures. 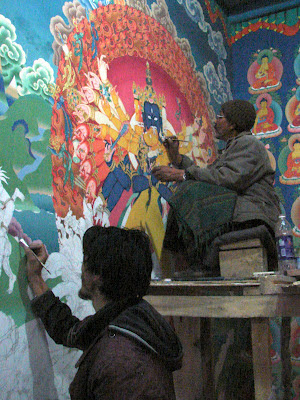 The monastery belongs to Drukpa Lineage or the Dragon Order of Mahayana Buddhism. His Holiness the Gyalwang Drukpa [conferred with Bharat Jyoti Award] is the supreme spiritual head. Gyalwa Gotsangpa Gonpo Dorje, one of the most celebrated yogis in the Himalayas, came to Ladakh in the 13th C and established the Drukpa lineage. 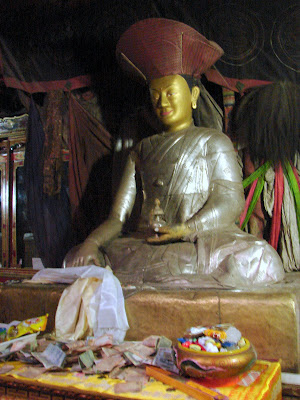 The monastery is an architectural delight, constructed during the period of Sengge Namgyal. It treasures a beautiful copper gilt idol of Lord Buddha, sacred thankas, gold and silver stupas and several other religious objects. 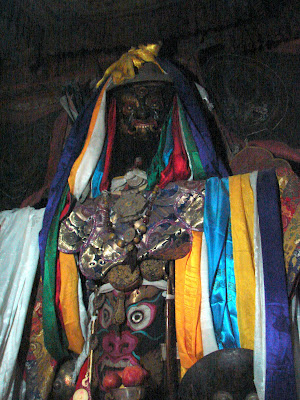 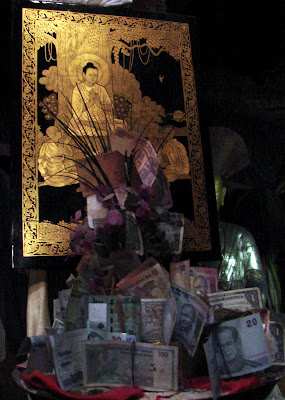 Hemis has more than 200 branches (monasteries) in the Himalayas and more than 1,000 monks under its care. It is an important living monument and heritage of Himalayas and its people. The monastery contains the richest collection of ancient relics. 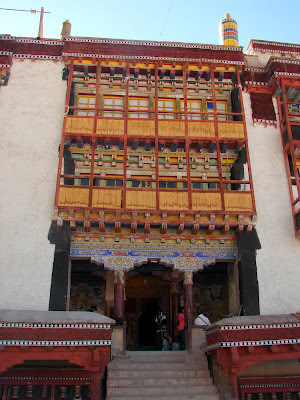 The huge courtyard is the venue for annual Hemis Festival dedicated to Guru Padmasambhava, the founder of Tantric Buddhism in Tibet, and marks his birth anniversary. The ‘Thangka’ or sacred tapestry depecting Guru Padmasambhava is decorated with pearls and is displayed in Hemis festival once in every 12 years. It is said to bestow good health and spiritual strength. The sacred mask dance performed at the monastery is the main highlight of the Hemis Festival. 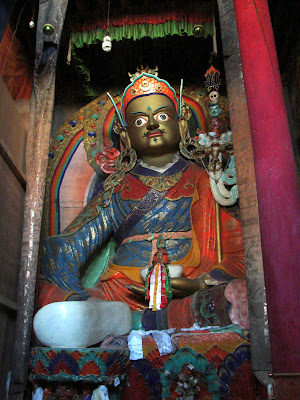 Padmasanbhava [the lotus-born] better known as Guru Rinpoche(precious guru) or Lopon Rinpoche or simply, Padum in Tibet was born into a Brahmin family of N-W India in the kingdom of Oddiyaana [modern day swat valley in Pakistan].

Considered as an emanation of Amitava Buddha and venerated as 'Second Buddha, he is said to have practiced tantric rituals. He hid a number of religious treasures including the Bardo Thodol [Tibetan Book of the Dead] in lakes, caves, fields and forests of the Himalayan region.


"His two eyes are wide open in a piercing gaze. On his body he wears a white vajra undergarment and, on top of this, in layers, a red robe, a dark blue mantrayana tunic, a red monastic shawl decorated with a golden flower pattern, and a maroon cloak of silk brocade. He has one face and two hands. In his right hand, he holds a five-pronged vajra at his heart; and in his left, which rests in the gesture of equanimity, he holds a skull-cup in the centre of which is a vase of longevity filled with the nectar of deathless wisdom. Cradled in his left arm is a three-pointed khatvanga representing the consort Mandarava. On his head, he wears a five-petalled lotus hat. Wrathful and smiling, he blazes magnificently with the splendour of the major and minor marks. He is seated with his two feet in the royal posture."
-- Jamyang Khyentse Wangpo


The three points of the trident represent the essence, nature and compassionate energy (ngowo, rangshyin and tukjé). Below these three prongs are three severed heads, dry, fresh and rotten, symbolizing the three kayas. 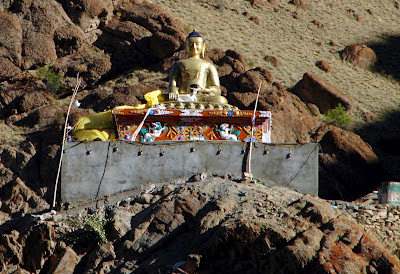