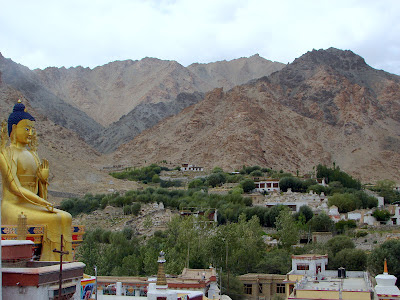 The geo-political landscape during 15th C was generally marked by bitter struggle for control of land. Monasteries in Tibet and Ladakh region controlled and owned large tracts of land and thereby the agricultural produce. Conflicts with rival sects of monasteries for political and material control were pretty common. They had to protect the inhabitants and the wealth from rival attacks.

Monasteries that flourished during this period evolved as small fortresses perched strategically on hills, utilising the terrain and reinforcing it with thick peripheral walls to form a protected inner core. 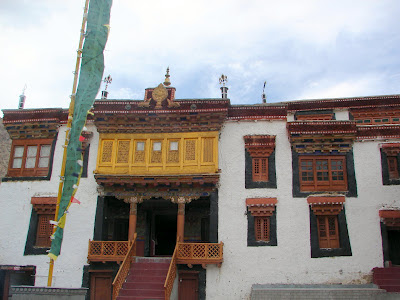 Monasteries like Likir played a very important socio-cultural and political decision making process during the 14th C. The monstery is located on top of a hill beside the valley of River Indus and has agricultural fields at the lower level while the monastery complex occupies the high grounds. 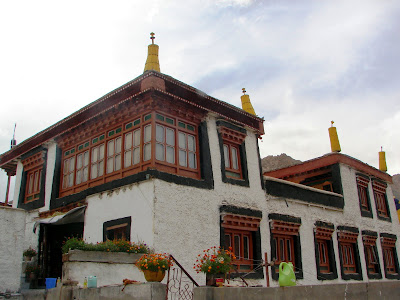 Buddhism revolves around the teachings of Lord Buddha and the Lamas of the past also hold very important position in the mythology and general beliefs system. The centrality in source of religious beliefs is reflected in the overall arrangement of the monastery complex.

The monastery complex contains the main temple and the assembly hall at the highest plateau of the hill, followed by the monks' quarters, kitchen and dining space. The village houses are at the lower slope. The main complex has narrow entry and exit points and has shear wall surrounding its periphery results in creation of a protected fort like complex 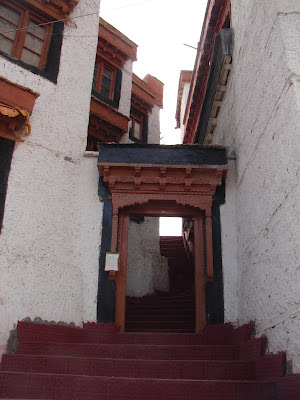 Likir means “The Naga – Encircled”. The Gompa represents the bodies of two great serpent spirits [Naga-rajas] Nanda and Taksako. It is believed to be associated with the Ka-dam-pa order. The gompa was refounded in the 15th C as a Ge-lugs-pa institution. Lama Duwang Chosje established the monastery belonging to the Gelugpa [Yellow Hat] sect of Tibetan Buddhism in 1605 under the command of 5th king of Ladakh Lhachen Gylapo. The present buildings of the gompa had to be reconstructed during the 18th C in the wake of a fire which destroyed the earlier structure. 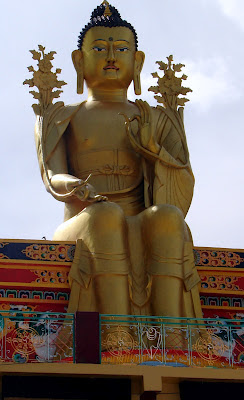 Likir enjoys a special status as a brother of His Highness Dalai Lama happens to be its head Lama who visits the gompa on important pujas. 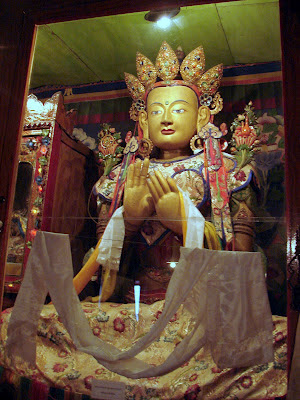 The monastery also houses a protective deity, located in the interior, with a golden armor. There are two Dukhangs (Assembly halls) inside the monastery, one of them relatively new. 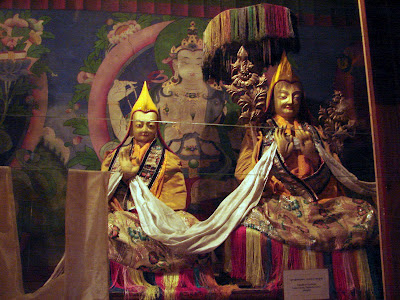 The main Du-kahng contains two chortens, Clay Images of three Buddhas - "Marme Zat" (past), "Sakyamuni" (present) and "Maitreya" (Future), Tsong-kha-pa with his two disciples. It is also equipped with wooden racks of volumes of scriptures. 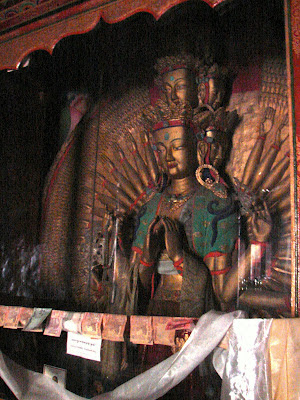 Another newly built Du-khang contains an image of 1000 arms and 11 headed Avalokiteshwara and some new paintains on the side walls representing benevolent Bodhisattvas and 26 Arhats. 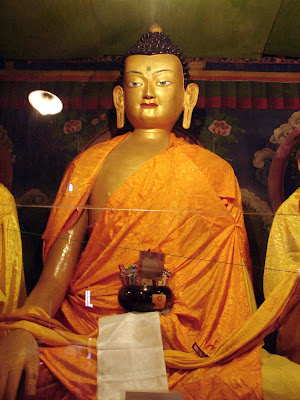 The Gon-khang houses a statue of "Tse-Ta-Pa", the wrathful protector. Additionally, the impressive murals of "Yamantaka" and "Mahakala" too adorn the Gon-khang. 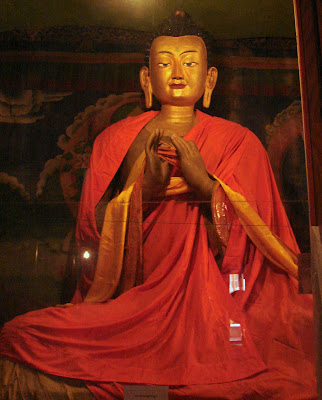 Within the old Dukhang are the statues of Bodhisattva (Lord of everything you see), Amitabha (Buddha of the West), Sakyamuni (the historical Buddha), Maitreya (the Future Buddha or Buddha of Compassion) and Tsong-kha-pa (founder of the Yellow Sect-hat). 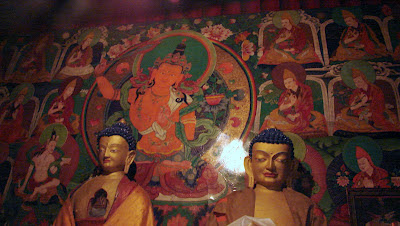 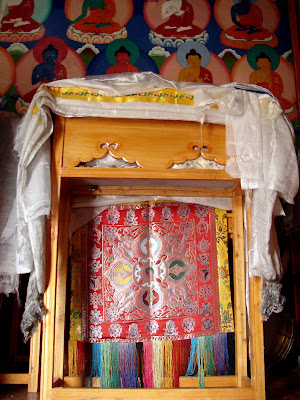 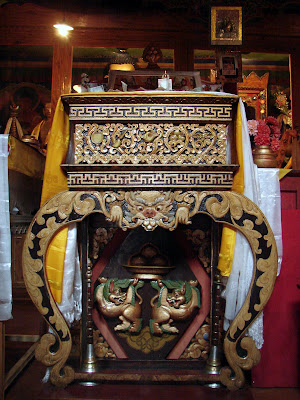 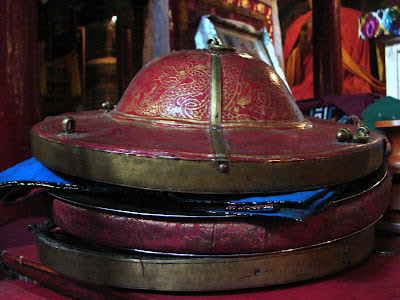 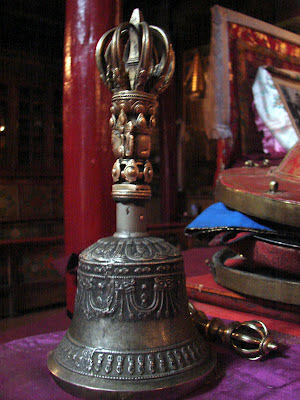 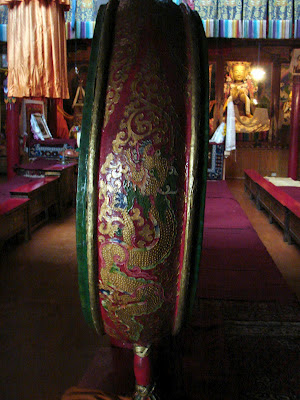 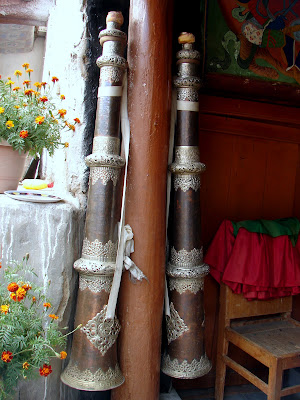 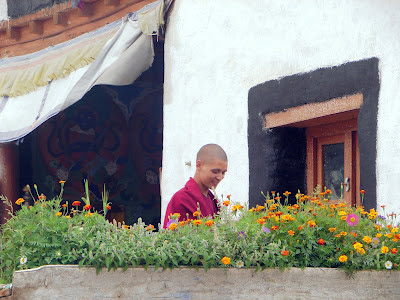