17 km south of Leh is one of the most beautiful 12 storeys monasteries of Ladakh - the Thiksey Monastery. Initially, the gompa belonging to the Gelukpa order was constructed by Sherab Zangpo at Stakmo. Later, his nephew, Paldan Sherab, established the monastery atop a hill to the north of Indus River.

As per a popular legend, Jangsem Sherab Zangpo and his disciple Palden Sherab were performing prayer services to the local deities at Arzoo valley [3Kms from the present Tiksey monastery]. Suddenly a crow appeared from nowhere and took away the ceremonial plate with Tormas[ritual cakes made from chickpea flour] in it. On searching, they were amazed to find the plate on top of a hillock. The Tormas were undisturbed or "in perfect order". The duo took it for an auspicious omen and built the monastery right there and named it Thiksey – meaning “In perfect order”. The monastery is situated in Thiksey village and the alternate name of the incumbent of the monastery is also addressed as Thiksey Rinpoche. 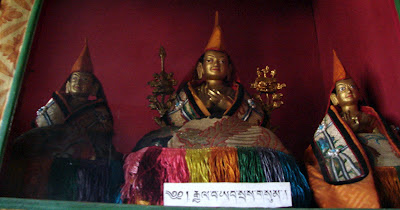 Since the monastery is similar to Potala Palace [former official seat of the Dalai Lamas] in Lhasa, it is often known as 'Mini Potala'. One of the biggest monasteries in Ladakh with over 120 resident monks, it has a world-renowned 40ft tall statue of Maitreya Buddha[Future Buddha]. 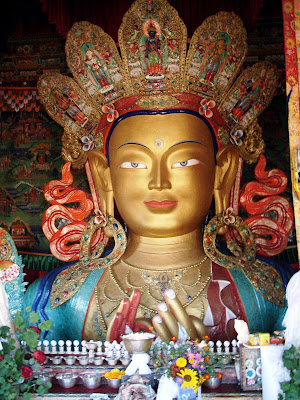 The statue was built at the behest of His Highness, the Holy Dalai Lama, when he visited the monastery in 1980. The statue was made under the guidance, supervision and direction of Kushok Nawang Chamba Stanzin, the present head Lama of Thiksey monastery. The staue, 15 m tall, clay statue covered in gold paint, is the largest figure of Buddha in Ladakh and took the local craftsmen about four years to complete it. 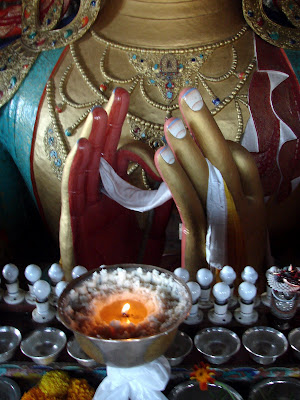 The Gompa contains 10 temples. Below the monastery are chapels and houses of monks stretching down the hillside. About 100 monks belonging to the yellow - hat sect of Buddhism.


A temple is also dedicated to goddess Tara with her 21 images placed in glass-covered wooden shelves. 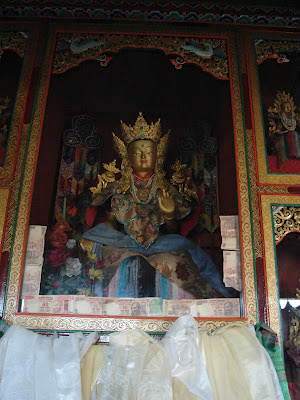 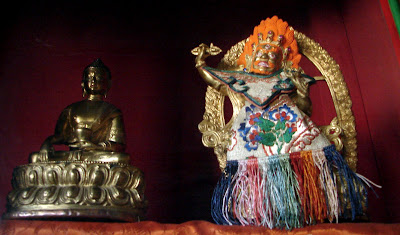 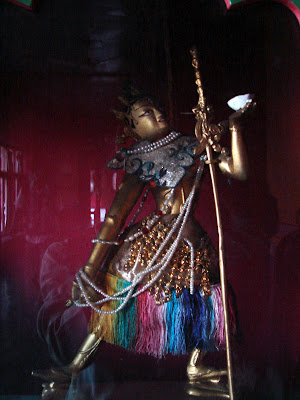 The nunnery or the school for the community of nuns is located within the precincts of the monastery and is managed by the Monastery Administration. Nunneries were held in a grossly inferior status and Buddhist nuns in particular lived in appalling conditions. Awareness was raised on the status of the nuns in Ladakh in 1990s and Thiksey received a degree of international attention and support. Ladakh Nuns Association was established in 1996. This was important in raising the status of the nuns in Ladakh, to ensure a shift in their functional role of “servitude and to one of true spiritual practice”. The Chief Lama, Thiksey Rinpoche of Thiksey Monastery was also important in these positive developments in the betterment of nuns. The monastery donated the land for a new nunnery at Nyerma, near Thiksey, at the same place where the very first monastic seat was established by Rinchen Zangpo, the Tibetan translator, in the tenth century. The nunnery is now under the patronage of Thiksey Monastery. 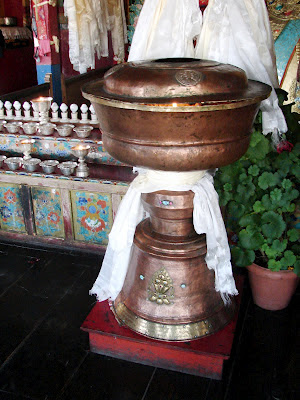