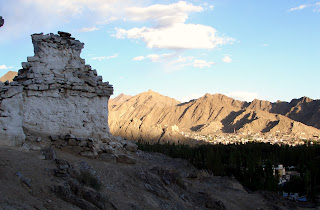 The Stupa represents Buddha's holy mind, Dharmakaya, and each part of the Stupa shows the path to Enlightenment. Building a Stupa is a very powerful way to purify negative karma and obscurations, and to accumulate extensive merit. In this way you can have realizations of the path to Enlightenment and be able to do perfect work to liberate suffering beings, who equal the sky, leading them to the peerless happiness of Enlightenment, which is the ultimate goal of our life."


Reference: http://www.stupa.org/stupas.htm
A site is selected to build the Stupa and the earth deities are addressed to seek the blessings for the site to remove any obstacles. All people involved in the work should have the right motivation to ensure that every aspect of the stupa emanates pure mind of Buddha.

Each Stupa rests upon a square base (Lion's seat). The four sides represents the four qualities of mind namely Love, Compassin, Joy and Equanimity, that are essential to attain enlightenement. The base is then filled with jewels, precious texts and relics pertaining to Stupa building. 5 steps are built on the Lion's seat that represent the progress of mind towards enlightnment. Each step can be divided into 2 parts that alludes to the 10 levels of Bodisatva realisation.

Bumpa, a round form, that represents the 17 levels of the realm of form, is built on top of the steps. Depending on the size of the stupa, it can contain a room for meditation and Puja. If it is small, it will simply be filled with precious and pure representations of Buddha's mind. 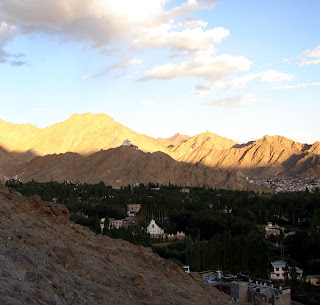 View of Leh City from Shanti Stupa
A spire forms out of the Bumpa and on top of that sit the ornaments that together represent the four stages of the formless realm. The inner contents of the Stupa and the outer manisfestation mirror the pure mind.

A central axis called the Sog Shing, meaning “Life Stick” is made, and is traditionally carved from Sandalwood or Juniper. However, if it is not possible to obtain these woods, the wood of any tree which does not bear poisonous fruit can be used. At the tip of the Life Stick a picture of the Victory Stupa is made and at its base that of a half Dorje. Holes are made at the top and base and blessed relics, medicines and texts are placed inside. The Life Stick is then wrapped in precious materials and is fixed in place on the Lion’s Seat. It is long enough to protrude to the Stupa's highest point.

The Stupa is then filled with relics which symbolically pertain to the utmost purity of mind. It is said that if the Stupa itself is the representation of Buddhas' body then the Relics are the life force which flows through it and, as such, are even more vital than its outer form. 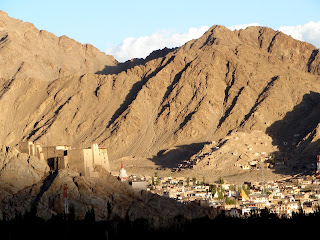 View of Leh Palace from Shanti Stupa
Once the Stupa is complete and all the relics are in place, a blessing ceremony takes place. A gathering of many realised Lamas and Masters along with Sangha, Retreatants and Lay practitioners is arranged and prayers and blessings are made to complete the process of the building the Stupa.

The Benefit of the Stupa emanates far and wide and is said to go on for Aeons. The positivity generated by such activity is impossible to measure. Liberation is said to be given by merely hearing about a Stupa, by touching it, by seeing it, by praying to it, by walking around it and by eating the offerings that are made to it. 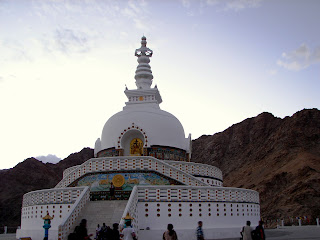 Shanti Stupa - Leh
Sitting majestically on a hilltop in Chanspa, Leh district, Ladakh, in the north Indian state of Jammu and Kashmir, Shanti Stupa is a white domed Buddhist stupa. It is an elegant stupa built by Japanese monks to promote world peace and prosperity and to commomerate 2500 years of Buddhism. It has brightly coloured reliefs on its mid-levels and is topped by a spired white hemisphere. It is considered a symbol of the ties between the people of Japan and Ladakh. The Stupa holds the relics of the Buddha at its base. 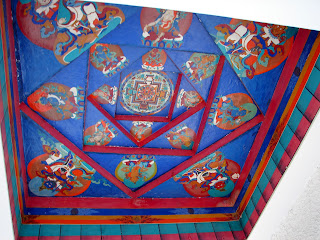 The beautiful positioning of this stupa provides a breathtaking panoramic view of the surrounding landscape. This has become a primary reason for Shanti Stupa to become a tourist attraction, apart from its religious significance
Posted by Casey at 1:16 PM

Thanks for the informative post about Leh Ladakh! Do check out our post on the Leh Ladakh Attractions during our 13 days of travels in India as well!