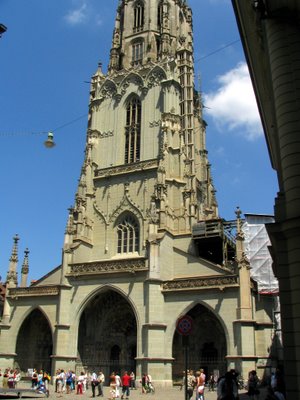 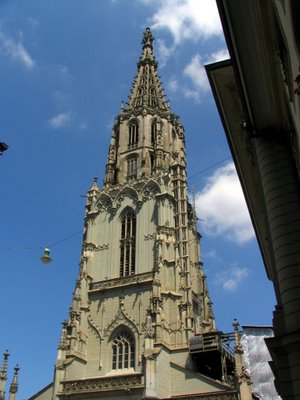 The first chapel on the site was recorded in 1224. On March 11th, 1421, Matthäus Ensinger a master builder from Strasbourg started the construction of St. Vincent cathedral, using the greenish local sandstone. Work continued until the mid 16th C according to his original plans. Most of the church's treasures were destroyed in 1528. But some notable pieces such as the portal sculpture, choir stalls and stained-galss windows survived. The münster was finlly completed in 1893 after a gap of 3 centuries with the addition of spire. 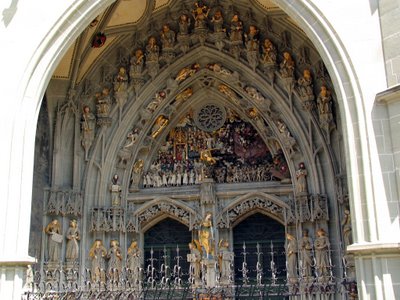 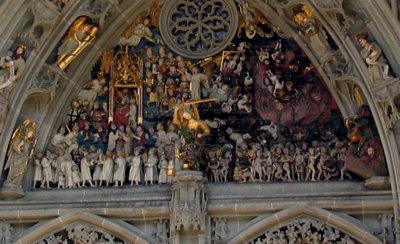 The central portal of the cathedral has spectacular depiction of the "Last Judgement" in the Gothic style. 170 small figures are the 15th C originals. 47 larger free standing pieces were replaced by copies in 1964 and the originals are now in the Bernisches Historisches museum. The left half of the portal depicts the "saved" and the right half the "damned". The left portal has beautiful smiling figures and the right portal has naked, screaming torment figures. This portal must have appealed to the iconoclastic reformers too as they spared it from destruction. 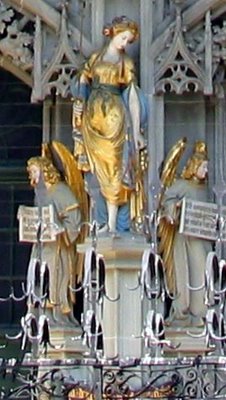 In the very centre is Justice flanked by angels Wise and foolish virgins and above the Archangel Michael wielding a sword and scales.

This medieval building was never a Catholic church as is often stated, for there has never yet been a bishop of Bern. This now serves as a Protestant church.
Posted by Casey at 8:50 PM

Beautiful photos. The architecture seems spendid, and the 3rd and 4th photos were specially good.

are these pics from your cam , or you got them from some site,

And if these are from your cam ,, who shot them...

Some of my dear friends ( the blog review committee) feel these are too good to be clicked by you,

Hi! I’m the Community Manager of Ruba.com. We’re building a website to highlight some of the most interesting places travelers around the world have discovered. We’ve read hundreds of blogs about Switzerland, and we think that yours is awesome! We’d love to highlight excerpts from blogs like yours (assuming it’s OK with you of course) and to discuss other ways of tapping into your expertise if you are interested. I’m at erin@ruba.com.
Thanks! :)

What an interesting blog, introduced by a thought-provoking photo. The unusual wall painting of the dwellings is also a strangely modern interpretation. Something like this hieroglyphic view of a park by Swiss painter Paul Klee, http://EN.WahooArt.com/A55A04/w.nsf/OPRA/BRUE-8LT475.
The image can be seen at wahooart.com who can supply you with a canvas print of it.