I took the bus 140 at 5:10AM, from Harrow bus station stop, to Heathrow airport central. I reached the airport at 5:55AM. I walked to terminal 3 to take the Heathrow express to terminal 4. On reaching Terminal 3, I realised that the Heathrow express would only run from 6:15 AM. OOPS! That wasn't good news. But I had no option. It was drizzling outside and I didn't want to lug my baggage to terminal 4. The entrance to the platform was locked :(. So I sat outside, waiting for the terminal service train.

The gates opened at 6:15AM. The first train arrived. I got on to the train and held the flight ticket in my hand, but there was no sign of the inspector. I put my ticket back in my backpack and stood near the door so that I could get off as soon as they opened and rush to the checkin counter. It took just a few seconds over a minute for the train to reach terminal 4. I pulled my cabin baggage and ran towards the check-in counter. M was already waiting impatiently. I rushed to the checkin counter and got my boarding card. Though he didn't complain loudly it was quite clearly written on his face that he was mad at me for arriving late :). I had to explain to him that the inter-terminal service started only at 6:15 and so I had to wait for it to begin. It didn't take much time to checkin as we were the last couple of people to check in.

Though I didn't request for a window seat, the officer at the desk handed me my boarding card with a window seat number on it :). M got the one besides mine.MK, his wife and kid had already settled in their seats when we got on to the flight. MK wanted to exchange tickets with me. But I wanted M to take pictures as we took off the ground and so we had already decided to exchange our seats and I am glad we did. If you notice the pictures carefully, you will see some interesting patterns in the picture. 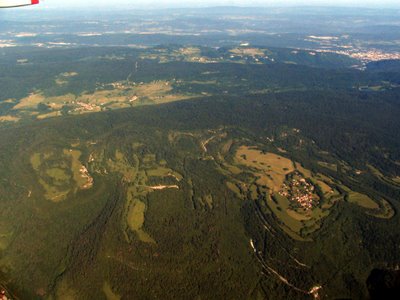 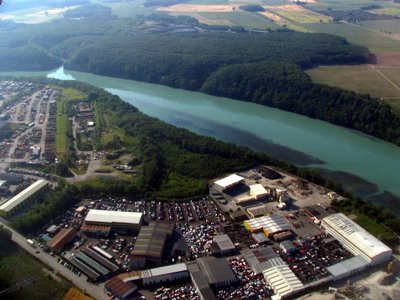 We were served vegetarian sandwiches for breakfast. They didn't taste very good :(. But we had no choice. I had read on the internet that it wasn't very easy to find good vegetarian food in Switzerland. So I ate all the food that was served though I didn't quite enjoy it. I complained a couple of times to M who only managed to smile and say
"it is better than the food you cook."
How rude!

The airport authority immigration check at Geneva took a couple of minutes. The immigation officer was a handsome guy. I must confess M caught me a couple of times ogling :) at the officer and said
"there will be more handsome men in the country. You can ogle at them later. Now we should probably make our way to the baggage reclaim".
The officer asked me a question in what sounded like French and I only managed to smile and shrug my shoulder and say
"Sorry. I didn't follow what you said. Could you repeat your question please?"
The man probably didn't know English coz he muttered something and added "OK. OK", scanned my passport and handed it back to me. I was expecting him to stamp "immigration cleared" or something like it on my passport, but he didn't. I mentioned it to M and he said
"they probably scan your passport in the machine and so they don't have to stamp on it."
Mmmm... that was something new! 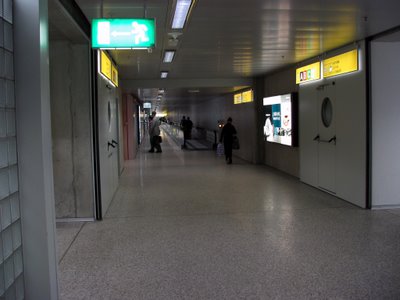 The entire process of the immigration took us just a couple of minutes and we were off to the cabin reclaim section. We collected our baggage and walked over to the train ticket section. There’s only one terminal, replete with English-language signing. The tourist information and airport information desks (both daily 6am–midnight) are in plain view, offering free maps and advice and hotel reservations boards (with complimentary phone). To the left of tourist information is a revolving door giving access into the adjacent CFF train station.

You can buy a Swiss pass and travel anywhere in Switzerland. The Swiss Pass offers 4, 8, 15, 22 days or one month unlimited access to Swiss Travel System’s rail, bus and boat network at very attractive rates. Refer http://www.swisstravelsystem.ch/?L=2 or http://www.raileurope.com/us/rail/passes/switzerland_index.htm for details.

I was keen on going to Bern while M wasn't :(. He felt he could go trekking in the mountain passes rather than spend another day in the city. After much discussion (or should I say argument? :)....), he reluctantly agreed to go with me. So we bought the combined rail pass for two as we could save a couple of CHF. Since MK and his wife didn't have any particular choice of their own, they agreed to go with us.

We walked to the adjoining railway station that is just about 200m from the flight. The airport waiting lounge was flanked with the models of these beautiful cows... 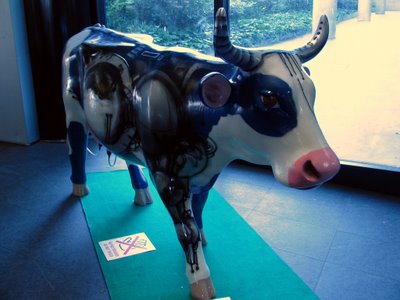 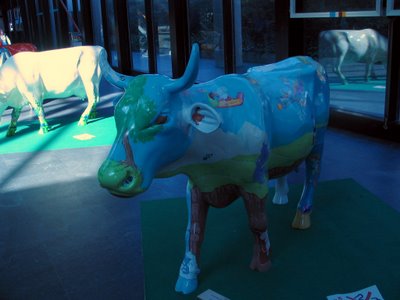 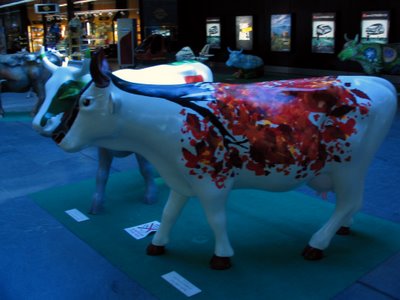 We boarded the train to Bern and were on our way to the capital city within few minutes of arriving at the airport. Our country would benefit much if the transport system is modelled on the lines of the the Swiss nation. 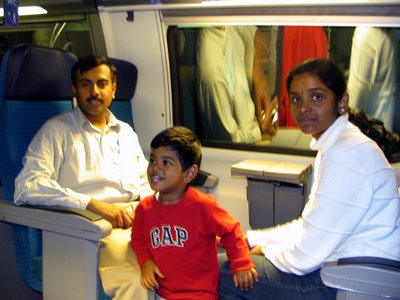 intresting.... quite a bit of useful info for people who want to go there....
and nice pictures too..
put up more pictures...

Thanks Vin. Sure. I shall be adding more pictures in the other posts :) that are to follow soon.