Bern - A day in the Swiss capital

We took the train from Geneva airport to Bern -- the capital of Switzerland. We rented a locker in the railway station for 8CHF and stored our baggage. We took the tourist map and set out on foot towards the center of the city.

I was excited! I was finally in the country that I always aspired to visit. Switzerland to me was always synonymous with snow capped mountains and chill wind. But there was neither snow in the city nor was it cold. We were in the country during summer and it was quite hot.

Just when we were about to turn round the corner near the railway station, M returned to the locker room to get his cigarette lighter. After he collected the lighter he realised that he had to insert 8CHF to shut the locker :) again. I smirked at him :) and said
"Serves you right. You don't listen to me when I try to stop you from smoking and now you have to pay 8CHF to smoke one cigarette. Don't you think that is one overpriced cigarette?"
ah-ha! Finally the scores were even! He had called me a bad cook and now I had the opportunity to taunt him and how could I let it go :)?! Needless to say, M was offended and he probably might have even sworn at me silently :).

The help desk assistant at the tourist information center had marked a few monuments and other places popular with the tourists, on the city map. We followed the road that led to the Swiss Parliament house pausing briefly to verify the map and ensure that were on the right road. We had already ridden on the excellent inter city train. The local trams also looked quite good. I'm sure it would be great to ride on one of those trams. 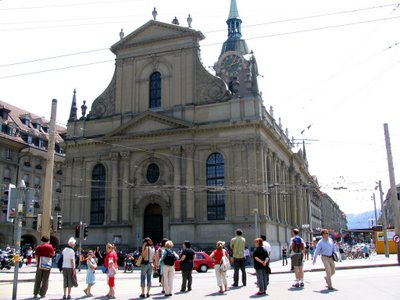 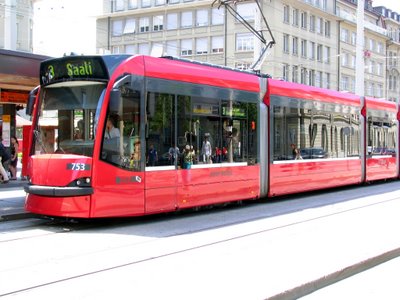 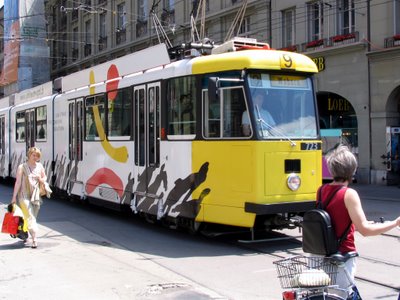 We visited the Swiss parliament. There are guided tours at particular hours of the day,but we didn't go inside. It didn't look as beautiful as I had imagined it to be. Maybe the interior is more elegant than it looks from the outside?

We ticked off one monument the travel assistant had marked on the map. Quite close to the Swiss Parliament is the Swiss National bank. I must confess that the building didn't match up to my expectations :). I had imagined a more grandiose building.

We went around the Swiss Parliament that is situated beside the river Aar. This old part of the town has tile houses that are built alike; they are simple, but solid structures of sandstone blocks, mostly three stories high and sheltered by projecting high-gabled roofs. 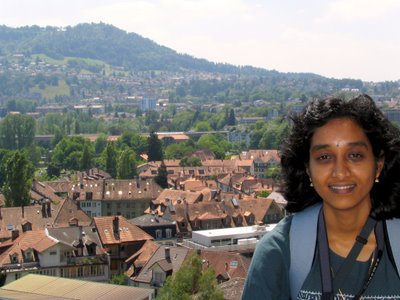 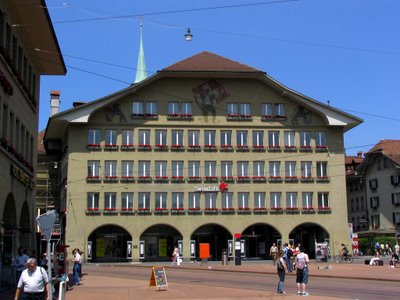 Next on the list were the clock tower and the münster. M didn't like the clock tower but I was mesmerized. Wish I had binoculars with me to see the clock. The clock reminded us it was almost time for lunch. There was a McDonald outlet situated very close to the clock tower. We were slightly more than surprised to see the price list. Surprised wasn't probably the word... we were probably SHOCKED. Food is very expensive in Switzerland. I had read that information on the net, but hadn't expected that a vegetable burger and a soft drink would cost me 10.55 CHF. M ordered a chicken burger and a coke. We were also served French fries with the food we ordered. We went upstairs and occupied the few empty chairs in the room.

Until then I hadn't realised how hungry I was. But once the food was served on the table, I started feeling hungry. We were all so famished that we started gobbling the food as soon as it was served. M toppled his glass containing the coke. I offered him Mirinda but he didn't drink it. Well... if that is what he wanted... I wouldn't compel him to drink Mirinda!

Next we went to the münster. We sat outside the church for a while and listened to the local band. 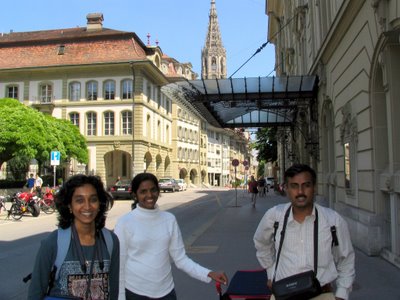 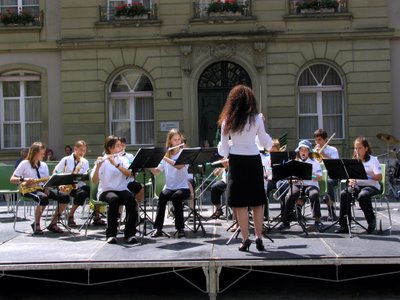 We checked the map and decided to walk beside the river to the bear pit and then to the rose garden. We sat in the little garden beside the river for a while looking at the serene water. The landscape around Berne was formed by glaciers in the last ice age. The city was originally built on a peninsula engulfed by the river Aar but outgrew the natural boundaries of the river in the 19th century. 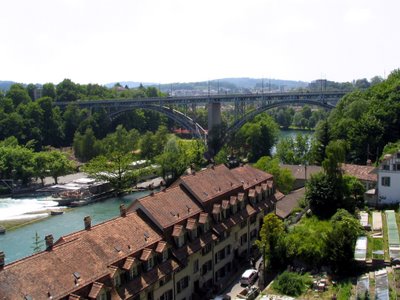 We stopped at the bear pit and watched the two bears. Bears have been maintained in the pit for over 400 years. The animals didn't look happy (obviously!) and they were resting in the little shadow that was cast by the wall of the pit. We couldn't watch the sad animals and M didn't want to even take their picture. We started our ascent to the rose garden.

MK decided to rest in the cool shade of the trees with his son and the three of us (me, M and MK's wife) started walking up the little hill. I was tired after climbing half way up the hill and MK's wife was literally gasping for breath. A couple of elderly women passed by and one of them smiled at us and said "you are young girls. You should be running up the hill and not stopping to rest". Having said this, they continued climbing the hill.

I must confess I was slightly embarassed at what the women said and so got on to my feet immediately and started climbing the hill again. MK's wife was making a Herculean effort to climb :). We finally succeeded in climbing the hill but were disappointed by what we saw. There were a few rose plants that had almost wilted away because of the summer heat and the roses weren't worth mentioning either. My mom grows better roses in our garden at home :(.

We knew that the garden up the hill was disappointing, but MK didn't. When we returned, we decided to make him jealous :) by saying that he had really missed something. He looked terribly disappointed. He was still repenting for having opted to stay back, when M spoiled the fun by blurting out that the rose garden wasn't really worth the climb up the hill. Aargh! What a spoil sport!

On the way back we stopped at a flea market. The vendors advertised that the few unusual assortment of things that they were selling in their shops were from the world wars' era. I was tempted to buy a few porcelain dolls. But the price was ridiculously high! How disappointing! One shop had a few torches and kerosene lamps that wouldn't light now :)...

We returned to the train station and collected our baggage from the storage room. We walked towards the platform to take the next train to Interlaken...
Posted by Casey at 8:55 PM

switerland was hot ??? i always imagined it to be cold , greeeeen and snow... he he he....
and looks like they fleece lot of money.... 8C just to shut the locker again.. he he he

Believe me, that is what my colleagues in England tell me about the entry price to monuments in India. We charge as little as 10Rs for an Indian and about 5USD for any other foreign national.

A very nice, content along with very good information and it is very useful and helpful.
Thanks for share
Golden Triangle Tour Packages