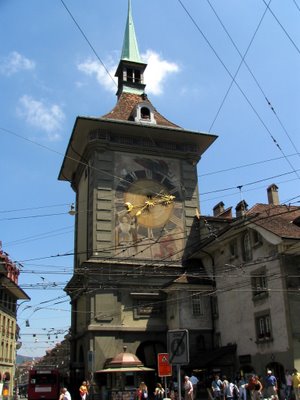 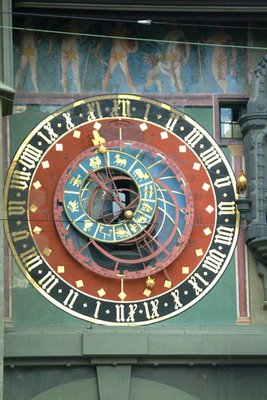 This 600 year old astronomical clock has a big dial on the outside that measures the 24 hours of the day. The star pointer gives the month and date. The darkest panels at the back indicate the time of sunrise and sunset while another point shows the sign of the zodiac. The moon pointer shows what stage the moon is at (full moon, new moon, crescent etc). The simpler mechanism of the clock was replaced by the current clock mechanism in 1530. The mechanism is composed of interlocking iron wheels, ropes, levers and knobs. The momentum of the clock is generated by the gradually descending stone weights that hang from long ropes through three floors of the tower. Highly paid, specially comissioned experts tried to add a pendulum to the mechanism but failed. A local farmer at the beginning of 18th C solved the problem. 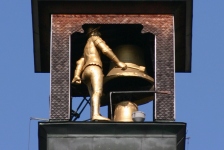 The tower has a 1.4 ton bell that gives the tower its name. The month and the year it was cast (October 1405) is engraved on the bell. This year was the turning point for Bern. The wooden city had burnt down to ground and thus brought about a massive reconstruction project. The new project was to construct the town in sandstone. 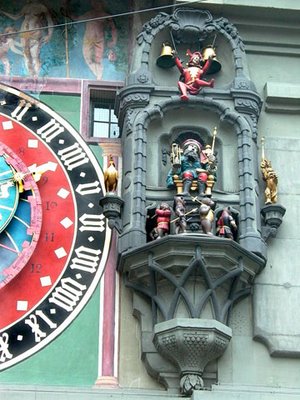 To the right of the clock is a carillon that moves every hour (start 4 minutes before the full hour). It sounds small bells by means of a 'jester' indicating the number of the next hour. The jester rings the two bells alternatively while a round-about of 7 bears rotate representing the days of the week.

The first bear mounted on a horse symbolises Sunday, the beginning of the week, followed by 6 other bears (monday - saturday) representing the different professions. The 4th bear turns his head when he comes out. The bear represents the 4th day of the week -- wednesday -- 'the turn of the week'. When the full hour arrives, the little man in rubber boots sitting on a golden chair starts counting the hour by moving his bearded chin while moving a golden rod - left-right-left. He is morally supported by a little golden lion that sits to his left and vigorously shakes his head for each count. At the same time, a huge golden male figure at the very top of the tower rings the big bell, one stroke for each full hour. All this is initiated by a golden rooster (flapping his wings) by crowing. He also crows in the middle of the show and finishes it off with his crowing.

The grim histroy of the tower
The tower was erected to serve the purpose of defence, but was later used as a women's prison. The so-called pfaffendirnens (prostitutes of the priests) who were condemned for having sexual relations with priests or monks were locked up here and severly punished. Many of them died in the tower.
Posted by Casey at 11:46 AM

the clocks r impressive...
what did the farmer in 18th C solve?

Highly paid, specially comissioned experts tried to add a pendulum to the mechanism but failed. The farmer added the pendulum.