44 km north of Udaipur is a small village in the Aravali hills known as Haldighati. Beyond this village is the Haldighati Pass. The soft yellow soil in the pass resembles turmeric / haldi when crumbled. This gives the place its name - Haldighati.

This place witnessed the famous Battle of Haldighati on June 18, 1576 between Maharana Pratap Sing of Mewar and the moghul army of Emperor Akbar of Delhi.

By the mid 1500s Akbar had forced all Rajput kingdoms, except Mewar, to become part of his empire. Akbar tried to force the Mewar king into submission, but failed. He sent a series of envoys to Mewar with peace treaty.

Akbar sent his first proposal with a team under the leadership of Jalal Khan Korchi. Two months of discussions did not yield the desired result.

The second proposal was led by Raja Mansingh - a high caste able Rajput who before serving the Moghuls, had extremely close ties with Mewar. Pratap refused to sign the treaty.

As per a popular folklore in Rajasthan, and as quoted briefly in epics like "Rajaprashasti" and "Vanshbhaskar", Pratap arranged for a "daawat" in Udaipur and excused himself from attending on the pretext of a stomach ache and sent his son prince Amarsingh instead. When ManSingh insisted on meeting the Maharana, Pratap refused to meet an outcaste. The enraged Mansingh challenges him to war. One Rajput commented "if you come with your army, then we will welcome you in Malpura. If you come on the basis of your paternal aunt's husband's (Akbar's) strength, then we will welcome you whenever we get the opportunity."

Insulted, Mansingh wentback. The food prepared in his honour was thrown into the lake and the ground where the party was held was dug up and Gangajal was sprinkled.

Conversation between Mansingh and Maharana during dinner,
Mansingh: "Why should I eat the dinner when you are not eating?"
Maharana: "Kuwar, you eat the food, I have stomach ache and I will eat later"
Mansingh: "I will give you 'chooran' for your stomach ache".
Mansingh then puts aside his plate of food and stands up with his companions. Wiping his hand with his handkerchief, he says "I shall wash my mouth when I come the next time"

Akbar sent Mansingh's father Bhagwandas with a proposal for treaty. To give Maharana a proof of his strength, he conquered Badnagar, Rawail etc. Maharana respected Bhagwandas as a Rajput and not as a Moghul messenger. The third attempt too proved futile.

Akbar then sent his fourth proposal with Todarmal - an able commander and a clever politician. He too was not successful. Now a war seemed inevitable.

Akbar marched to Ajmer in March 1576. After 15 days of discussion, he made Mansingh the commander of his army. Abul Fazal has written about Mansingh -
"Raja Mansingh who was foremost in Akbar's court in intelligence, loyalty, and bravery and who was given the high title of 'farzand' (son) was chosen to fight Maharana Pratap".

Mansingh camped for two months at Mandalgarh to increase his military strength and finally marched towards Khamror - 10 miles away from Pratap's military camp and set up his base. Rana Pratap reached Gogunda destrying all the areas of Mewar plains so that the enemy would not be able to get food, grass or shelter.

Finally the two mighty armies faced each other for a battle that would go down in the annals of Indian history as one which showcased the great valour of the Rajput troops led by their scion Rana Pratap.The result was indecisive, but the battle was truly symbolic of the raw courage, spirit of sacrifice, and loyalty of the Rajputs in their heroic defence of their motherland. 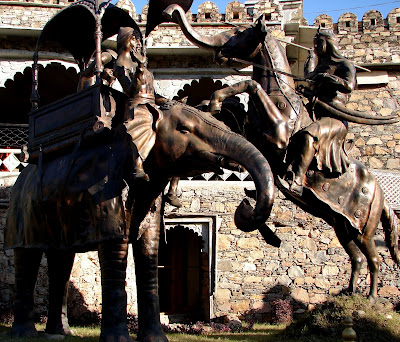 The infantry of the Bhils with their traditional bow and arrows was under the leadership of Punja. The main commander of Mughals - Mansingh, was on an elephant in the centre.Pratap spurred his steed to a determined gallop towards Man Singh. He cut his way through to the Mughal general. Chetak collided with the elephant's plate armour. He reared up against the huge beast, his forelegs glancing off its tusks. Man Singh was partly obscured by his mahout, but Pratap heaved his lance at the howdah. The weapon passed through the driver's body, killing him instantly, and smashed against the howdah's metal plates.

Man Singh had disappeared. Thinking he had killed Man Singh, Pratap let out a triumphal cry of revenge. The uncontrolled elephant swung around in panic. The broadsword attached to its trunk slashed through the tendons of one of Chetak's hind legs. Unaware of this, Pratap wheeled Chetak to rejoin his men.

The horse now had the use of only three of his legs but, enveloped by the furore, he persisted valiantly. Imperial cavalry,who had rushed to guard their commander Mansingh, now surrounded Pratap. Chetak was limping and stumbling. Suddenly, a great commotion of kettledrums came from the rear of the Imperial ranks.The Rajputs saw the Mughal reserves making their entry and Man Singh followed closely at the head of battle-weary soldiers and horsemen. 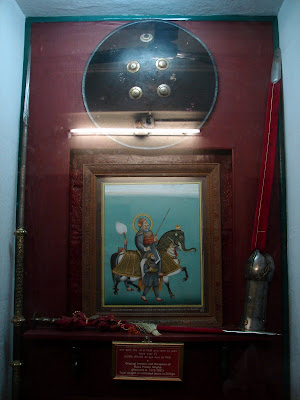 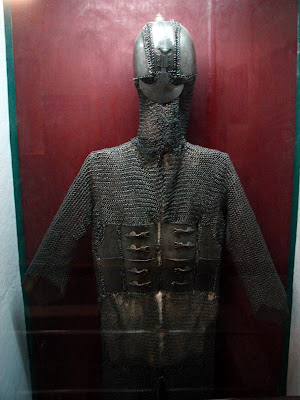 Pratap's first impulse was to destroy the Rajput traitor, possibly meeting death in a blaze of glory. One of his officers, Jhala Man of Sadri, snatched the royal standard of Mewar from Pratap's hand, determined to fight a rear guard action until Pratap's army had reached the protection of the defile. "Ride swiftly to safety!" he yelled. Reluctantly but wisely, Pratap shouted an order to his remaining chiefs to take their men to the village of Koliyari, where arrangements had been made for treating the wounded. 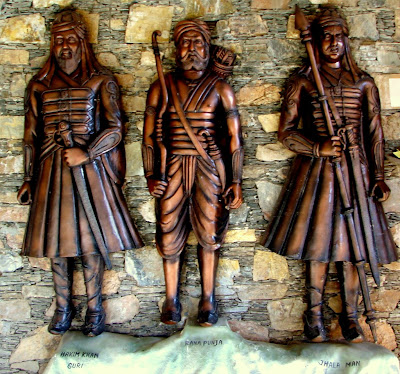 Waving the Sun-God banner, Jhala rallied his men to meet the enemy's counter-attack, as the remainder of the Mewar army disappeared into the cover of the hills. Bringing up the rear, Pratap stopped upon an outcrop of rock. He turned to look back at the swirling dust haze that all but hid the horrendous spectacle of the battleground. Through it came the tumult of shots, the clashing swords, the cries of victory and death. For a few moments, he was able to follow the progress of his crimson banner. Then it, too, fell. They continued on. Chetak was now limping badly. Pratap, too, was now faint from loss of blood; he had sustained seven severe wounds from musket, sword and lance. Having carried his master to safety, Chetak died. Pratap joined the remainder of his men, recovered from his wounds, then continued his guerilla resistance. 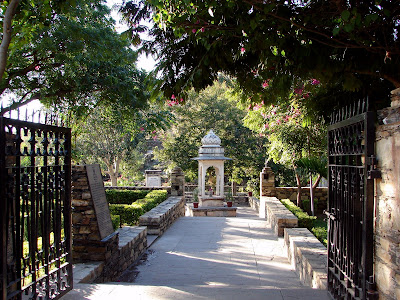 Thanks for this very informative ,

You are welcome Sunand!