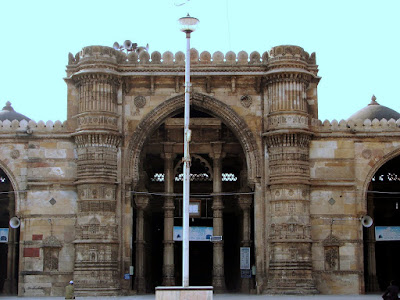 Sultan Ahmed Shah, the founder of Ahmedabad city constructed the mosque in 1423 A.D. in the heart of the old city. Jama masjid of Ahmadabad is classed as the best building of its kind in western Hindustan. 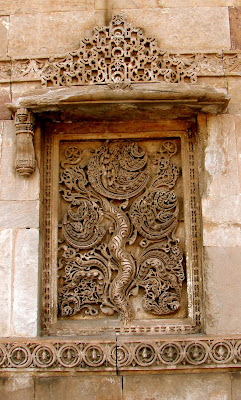 Made by using yellow sandstones, the architecture of this mosque is a blend of Hindu and Muslim styling. This edifice was built using items from the demolished Hindu and Jain temples. The mosque is supported by 260 pillars and consists of 15 domes.


The length of the veranda of the mosque is 103 yards by 89 yards. On either side of the veranda there are hallways which are 5 and a quarter yards in width, the flooring of the veranda is made of cut stones and the pillars of the hallway is of red brick. The hall consists of 354 pillars. Above these pillars the dome is situated. The size of this hall is 75 feet by 37. The floor, Mehrab and Minbar of this hall are made of marble. At the front on either side there are two round minarets from cut stone, which are spread on 3 sitting areas. This cut stone has beautiful ornamentation done. 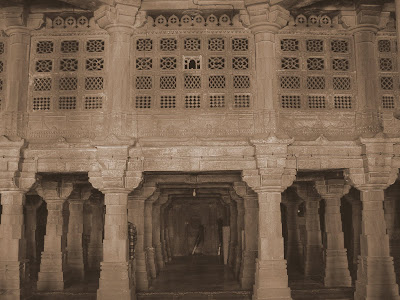 On the right side, in front of the minbar, in the corner of the hall is the Royal seating area. Stone slabs have been erected between the pillars. Stone curtains are present around the Royal seating area until the ceiling. The purpose of this construction was that when the King came to offer Jumma or Eid prayer at the mosque, he, his advisors and entourage would make their prayers on the highest seating (also known as the Kings hall). It is also possible that this was done from a security point of view so that the King would be protected. 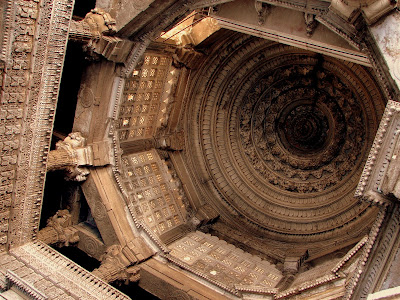 The method used to light this mosque is unique. The rays of light are made to change direction before being made to reflect into the whole mosque.

It took 13 years to complete this fine example of Indo-Saracen architecture of the Ahmed Shahi style. A white marble paved courtyard, with a pool in the middle provides a perfect pause between the raucous streets outside, and the dignity of the main sanctuary within. 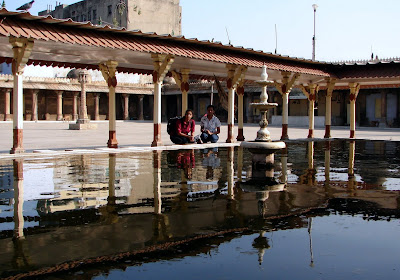 Nearby the Masjid are Pols and the Teen Darwaza (The Three Gates). Sultan Ahmed Shah built these arched gateways, which were meant as the royal entrance to the Maidan Shah or Royal Square. From here the Sultans used to watch the processions from the palace to the Jama Masjid. 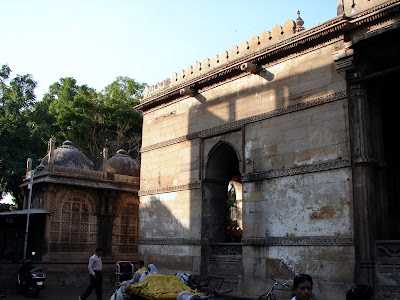 There are different entrances to the mosque. Near the eastern entrance are the tombs of Sultan Ahmed Shah, his son Mohammed Shah and his grandson Qutub-Ud-Din Ahmed Shah II.
Posted by Casey at 4:58 PM

Loved your post & pics, i have been to this mosque few months back. Have never seen a mosque so big & grand with such intricate art all over its walls & pillars.

Loved your post & pics, i have been to this mosque few months back. Have never seen a mosque so big & grand with such intricate art all over its walls & pillars.

Thank you deejthtraveller for visiting my blog and liking the post.