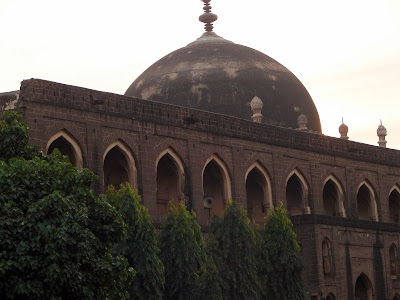 Jumma Masjid
The mosque is known as "Jumma Masjid" because the Khutba is recited here on Jumma ie. Friday. 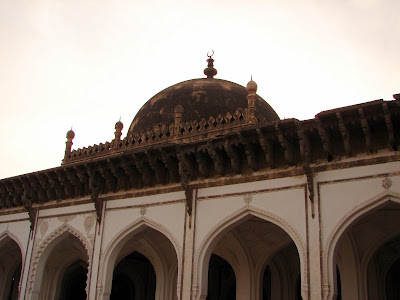 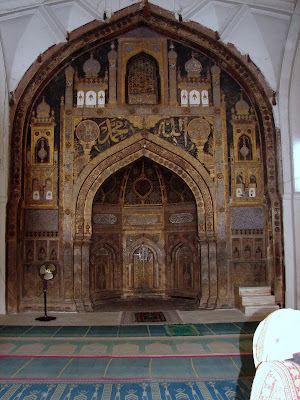 This was the first mosque to be constructed in the Adil Shahi kingdom. Ali Adil Shah I began the construction in 1576 using the booty gained by defeating the Vijayanagar kingdom in the battle of Talikota fought at Rakkasatangadi. Ali Adil Shah was a Shiaite and the sect prefers not to decorate the place of worship. Hence the mosque wasn't decorated during his reign. Mohammad Adil Shah was a Sunni and probably the elaborate mural decorations near the mihrab were added during his reign. This is recorded in an inscription to the right of the Mihrab. Teakwood additions to the ceiling were also made during his reign. The mihrab was gilded and decorated in black and gold. It was then inscribed with Persian verses.
Six Persian inscriptions found in mihrab are translated as:

2. The passing world has no rest

3. The world pleases the senses

4. Life is the best of gifts, but it lasts not.

5. Malik Yaqub, a servant of the mosque and the slave of Sultan Muhammad finished the mosque

6. This gilding and ornament were done by order of Sultan Muhammad Adil Shah, A.H. 1045.

Mihrab in Jumma Masjid
It is said that the Raja of Satara built the side walls connecting the original mosque or main prayer hall to the eastern wall. By 1686AD the mosque was mostly completed.

The mosque can accommodate 4000 worshippers at a time. The floor was divided on the orders of Emperor Aurangzeb into 2250 rectangular inlays that mimic prayer rugs. 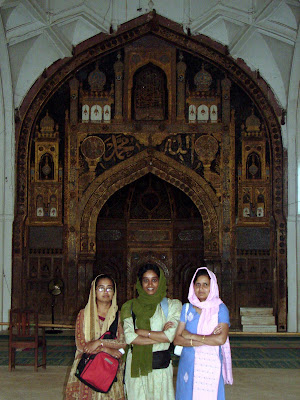 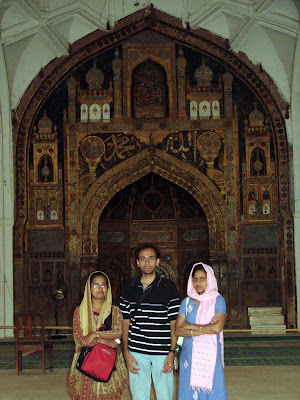 I was expecting one of the men in the mosque to walk up to us and inform us that "WOMEN" were not permitted in the prayer hall. But I was surprised that we women were allowed to walk upto the mihrab and offer our prayers. The priest pointed to two women and asked us if we were with them. We informed him we weren't. Then he pointed to the "hundi" (donation box) and told us to drop our offerings in it. He probably realised we weren't followers of Islam and so he ensured that we were informed about the donation box :). We dropped a few rupees in the box and sat in the courtyard for a while. 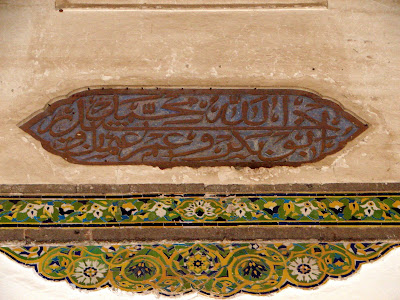 Persian (I guess) inscription on the wall near Mihrab 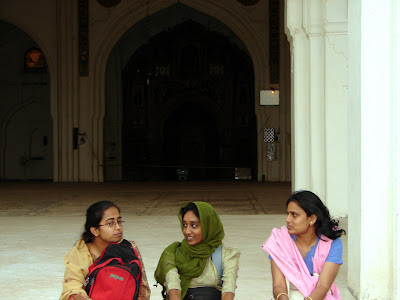 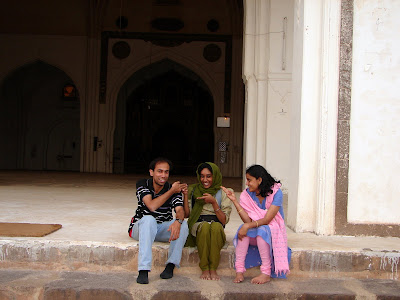 The prayer hall on the west side has a façade of seven bays, each bay having an arched opening. The arches are equal in size, while the central arch is delineated through delicate arabesque patterns in stucco. The prayer hall is crowned by an elegant, well-proportioned dome. The large inner courtyard contains fountain and a reservoir. We sat here for a while chatting and also had a pretend :) fight with V :).
Posted by Casey at 3:13 PM