Bahamani empire broke-up into five kingdoms and Bijapur was one of them. Yousuf AdilShah was crowned the king of the new Adil Shahi kingdom. The new kingdom rose to great heights in the middle of the 16th C under Ali Adil Shah, the grandson of Yousuf AdilShah, who brought down the mighty Vijayanagar empire in 1565. Soon after he undertook ambitious building projects in his capital that included the public water supply system and the new Jami Masjid. There was a large influx of people into Bijapur after the fall of the Vijayanagar empire, and new settlements came up within the walled city raising the need for better infrastructure and providing water supply. Ibrahim Adil Shah followed his father's footsteps and built Taj Bawdi in 1620 in honour of his queen Taj Sultana. 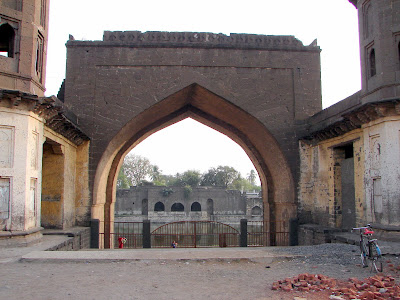 The well is 223 sq feet and 52 feet deep. The well has a 35 feet span majestic arch and is flanked by two octagonal towers. The eastern and western wings of the tower formed rest houses for the tired travellers. A small platform from the archway leads you to the well. Fligts of stairs on either sides of the platform lead you to the water. There is a narraw gallery on the inner side of the four walls covered by arch surfaces. The gallery passes through large rooms with lancet-shaped windows on all the three sides except the front. The rooms were meant for the use of travellers. 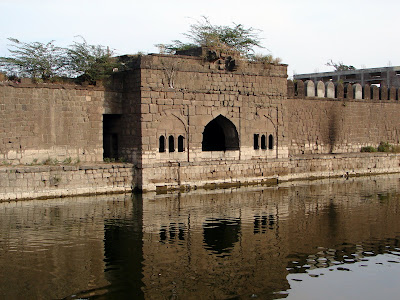 Travellers' rooms with lancet shaped windows
This well might have supplied water to the entire kingdom of Bijapur at one time. Little girls clinging to their mother while they filled water in their pots, little boys diving into the well from atop the platform, dames giggling while gossipping, young lads hanging around the well to catch a glimpse of the dames, tired travellers resting in the rooms beside the well... this probably was an everyday scene near the bawdi.

This tank was used until the Bhutnal tank was constructed in the 20th C after which it was used as a garbage dumping pit for decades. Recognising the historical importance of this tank, NSI declared it as a protected monument and spent about 8 lakh rupees in the latter part of 2005 to remove 10,000 tonnes of waste that was dumped in the well and filled it with water.

But exactly after a year, the tank seems to be slowly turning into a dumping pit. The stagnant water has turned green and it shall soon stink. The ignorant citizens of the city who do not realise the national importance of this monument are using the well to wash the clothes and dump garbage. There were a few women washing clothes when we visited this monument.

Time to Act
The Muslima Muttahida Council (MMC) "called to rebuild babri Masjid" on Dec 07 2006, 14 years after the incident. They hoisted black flags and observed "black day". They submitted a memorandum to the president and pressed the UP and the Union Govt. to rebuild the Babri Masjid. They can instead use the youth potential to maintain this historic monument in their own city. 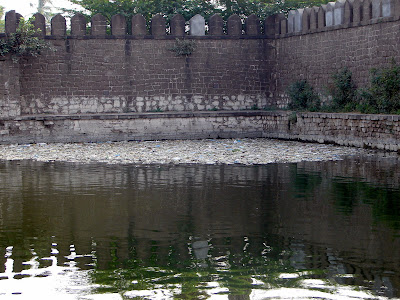 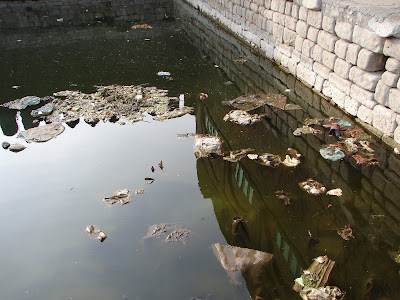 If you have been to Taj Bawdi in the recent past; have noticed the garbage and would like to complain then click here
http://www.bijapurcity.gov.in/pgr/BeforeReg.do
and hope the garbage is cleared.
Posted by Casey at 8:52 PM

Dear casey, Good writings but shame on your part for last paragraph.. Its applies to you also and everyone in our country to keep it clean,, once again shame on you for mixing your evil intentions in precious writing ..

Dear casey, Good writings but shame on your part for last paragraph.. Its applies to you also and everyone in our country to keep it clean,, once again shame on you for mixing your evil intentions in precious writing ..

Thanks for sharing your experience and photos with us . Keep posting like this. https://www.tajtourpackages.com

Bijapur is a nice place to visit in Karnataka. Thanks for this wonderful post in this blog. Loved to read this beautiful place. Pictures were awesome with well written. If you are planning for your trip to this place, then book your bus tickets in VRL Travels .