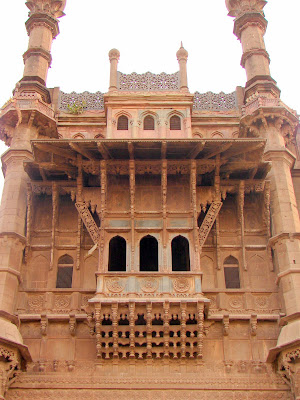 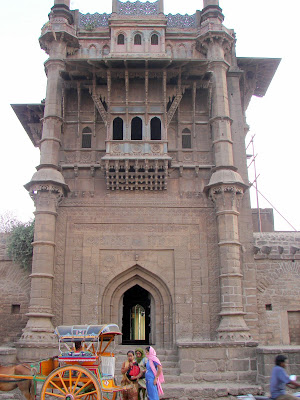 Munir Khan (I can't seem to recall the name of our Tongawallah. I guess that is what I overheard when V asked the name of the Tongawallah. But then I could be wrong.) took us to Mehtar Mahal and told us to see the monument from outside as this structure is a gateway to the mosque. As usual women might not be allowed to enter this place of worship. 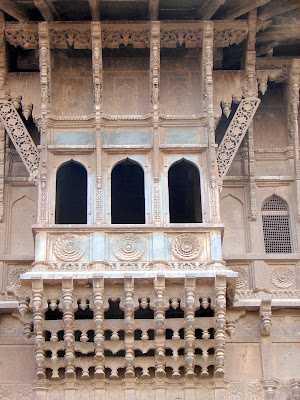 The architectural design of the mahal indicate that it might have been built about 1620AD. But there is no documentation of the architect or the person who got this structure erected. There are a lot of interesting stories related to this monument.

Some say that a sweeper built this gateway with the handsome gift he received from the king Ibrahim Adil Shah-I.

According to another story, a fakir erected this monument with the charity money that he received from King Ibrahim Adil Shah II.

Yet another story credits Mehtra Gada for the construction.

The most interesting story and my personal favourite of them all is the one that seems to be linked to the first story I mentioned earler. It credits the palace sweeper for the construction of the mahal. Legend has it that muslim divines would wave a plate containing gold coins and an auspicious lamp, before the king's face every night and offer prayers for his safety and well-being. The divine men would then spread the gold coins around the king's cot. The palace sweeper collected these coins and used it to build the mosque and the Mehtra mahal leading to the mosque. 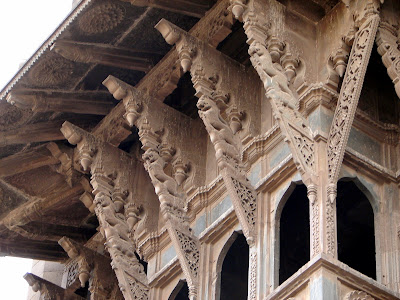 The ground floor entrance hall has a staicase that leads to a room above. The stone elephant and lion motif is breath-taking. Munir Khan told us to notice this bracket and probably I was the first one to notice it. I showed this to U and J while V walked over to the other side of the road to take a picture of the monument. Though he took this picture :) he said he couldn't see it clearly until he saw it in the photo :).

Lion-and-elephant-motif
Percy Brown Observes :
The fineness of the workmanship is astonising, the stone being manipulated as it it were plastic clay. Either in the chiselling of the low relief pattern around the doorway or in the deep moulding of the coffered ceiling of the ground storey, all is executed with a loving are recalling that of the artists of the Italian Quottro-Cento. The entire structure seems to imply that not only the artisans themselves took a pride in the perfection of the handiwork, but they were encouraged to do so by their patrons who experienced an equal pleasure in seeing such exquisite forms grow under their hands.
Posted by Casey at 12:35 PM

THIS INFO. IS ACTUALLY WRONG, MY NAME IS ABRAR MEHETR. THIS PROPERTY BELONGED TO MY FOUR-FATHERS AND I CAN GIVE YOU THE EXACT STORY ABOUT IT.

Thanks ABRAR MEHTER and devsear for visiting my blog.

ABRAR MEHTER, I am definitely interested in knowing the exact story about the monument that belonged to your fore fathers. Please do post a comment with the story.

Hi my name is Mehter Mohammed Abdullah.
I am from Bangalore. I would like to visit Mehtar mahal but I'm not able to locate it on maps..pl please help me my number is 8892126075 .I would like to know the history of my fore fathers. Thank you