Inscription on the Burj wall 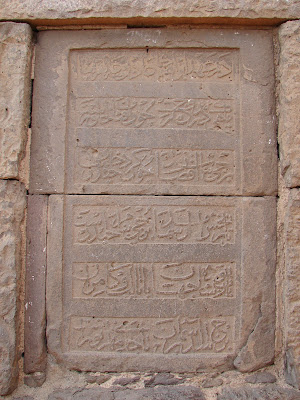 We had visited the Asar Mahal and Bara Kaman earlier in the day and were now visiting the Burj. The tongawallah stood waiting for us with his horse at the entrance of the Burj while we climbed the stairs to the top of the watch tower.

Also known as Hyder Burj, this 80ft tower was built by Hyder Khan, general in the service of Ali Adil Shah I and Ibrahim II in 1584. There are 70 steps (V argues that the steps were 69.. and the argument continues ;)....) leading to the top of this circular tower.

There were two men at the top who offered to tell us the history of the Burj for money. But having already acquainted ourselves of well informed the "guides" in the city were, we decided to keep away from them. I had printed the information about the monument that was available on the net. I read the content aloud for the benefit of the group. I read the description of "Malik-e-Maidan" from the notes I had compiled and somehow the description did not seem to tally with what we say (Obviously!).

The description in the paper read "Perched on a platform especially built for it, the cannon's nozzle is fashioned into the shape of a lion's head. & between the carved fangs is depicted an elephant being crushed to death." 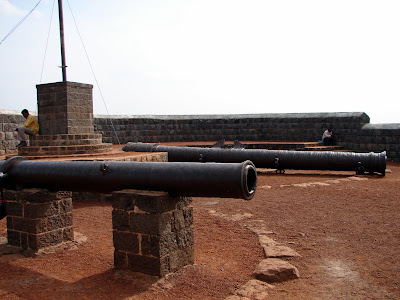 So where the hell was the lion's head? There seemed to be no elephant either? We inspected the canons throughly (V even tried peering into the sand filled canons to search for the lion) and were trying to imagine a lion and an elephant when two women in early twenties seemed to be laughing at our confusion. I complained loudly "I neither see a lion nor an elephant." V said "Don't you see it? I just saw it in that canon." I walked over to the canon that was further away from me and peered in. I still couldn't see the lion. All I saw was a dirt filled Canon. I turned around to ask V to point the lion when I noticed him giggling. Aaargh! He was just fooling.

One of the girls walked up to us and said "Oh! but this is Upli Burj. The other canon is in MulkMaidan. It is beautiful. You should go there.". I thanked her for the information and then read the description of the Upli Burj.

Upli Burj means "watch tower". There are 2 canons atop the tower that measure 9m and 8.5m respectively. The view from the top of the Burj is breath-taking. Some of the most important monuments of Bijapur are visible from here. 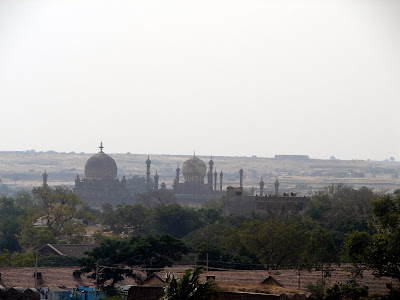 Jod Gumbad -- View from the Burj 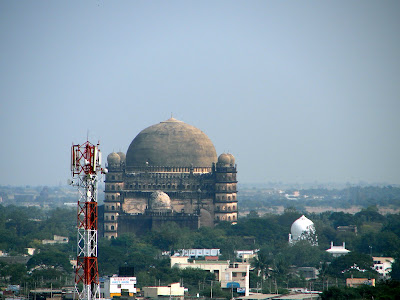 Gol Gumbaz -- View from the Burj 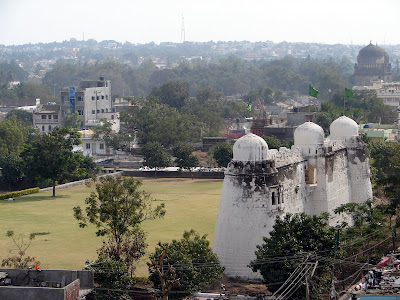 A mosque near Burj

It was time to visit the next monument in the city.
Posted by Casey at 11:30 PM