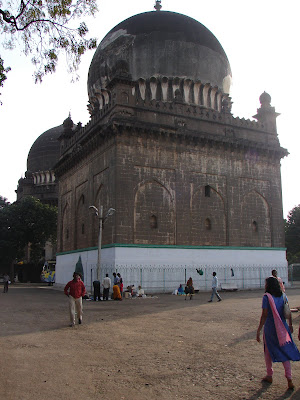 Built in the year 1687 Jod Gumbad is also known as "Abdul Razak Darga".
There are twin-domed memorial structures to two traitors, the father and son who helped the Moghul Aurangzeb defeat Sikandar, the young Adil Shahi ruler on the throne.
Text borrowed from http://www.bijapur.nic.in/tour.html I am not really sure why the people built a memorial to traitors. I haven't found further information on the internet as to how Aurangzeb succeeded in conquering the Adil Shahi capital either.

Now these structures have dargahs. They offered us a spoon full of holy water to drink in one of the dargahs. This ritual is very similar to the Hindu ritual that is observed in temples. We then went to the other dargah in the next gumbad and there were no priests or maulvis offering prayers but there were a few women seated outside the dargah. We enquired if we could go in and one of them told us that women aren't allowed to enter the dargah. So we waited outside for V, who had gone into the dargah. 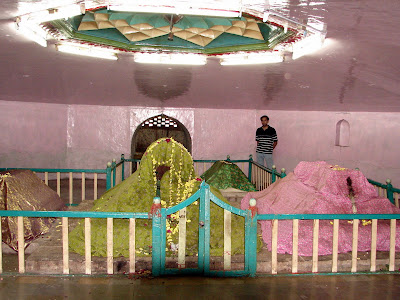 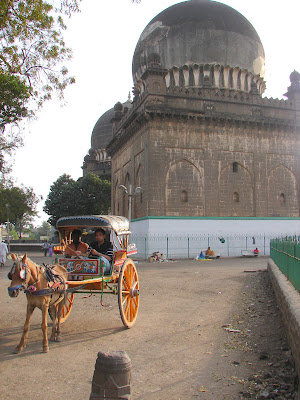 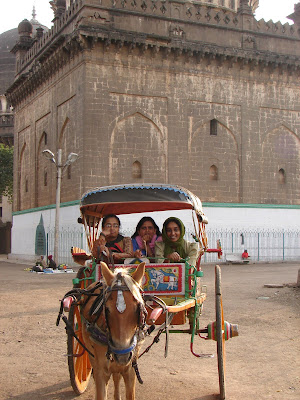 1 Dhanno aur 3 basanti? Bahut naa insaafi hain
This was probably the last of the monuments where we could take a picture in the tonga. We requested the tongawallah to position the tonga so that we could get the gumbad as the backdrop. With the tonga so positioned, we finally managed to take this picture seated in the tonga. How could we not remember the ever so famous Dhanno and Bansanti from Sholay while we were riding a tonga? U mentioned Dhanno and Basanti and we couldn't help but smile :).
Posted by Casey at 8:10 AM