Malik-e Maidan ("monarch of the plains" or "Lord of the Battlefield") set up by Muhammad Adil Shah is a huge cannon located on the top of the tower. It is said to be the largest weapon in medieval times. The great Muzzle has been fashioned into the shape of a lion or a dragon with open jaws, and between the sharp curved fangs is a small elephant on both sides of the muzzle. The small ears have been drilled into holes to attach tackles. It is a cast of alloy of copper, iron and tin and when struck sounds like a bell. The outside surface is dark green and polished like glass and adorned with inscriptions in Persian and Arabic. 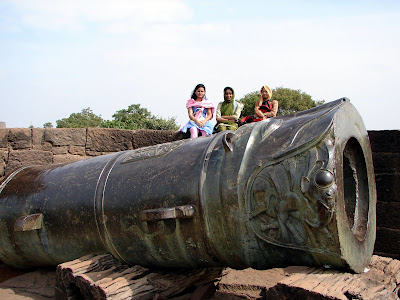 Muhammad-bin-Hasan Rumi, a Turkish officer in the service of the king of Ahmednagar, cast his gun in 1549, as can be seen from an inscription on the gun. In 1686 Aurangzeb has also recorded an inscription on the gun saying that he subdued the Malik-e-Maidan. When the fort of Parnadah where this gun was installed, fell in to hands of Bijapur, General Murari Pandit brought the gun to Bijapur as a trophy of war and set it up on the present bastion. It was set up here with the help of 10 elephants, 400 oxen and hundreds of soldiers. It weighs 55 tons, is 8.5 metres long and 1.5 metres in diameter. To avoid going deaf, the gunner had to submerge his head in water before firing. Legend has it that if you touch the gun and make a wish, it will come true! 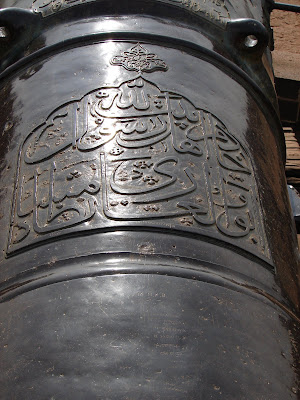 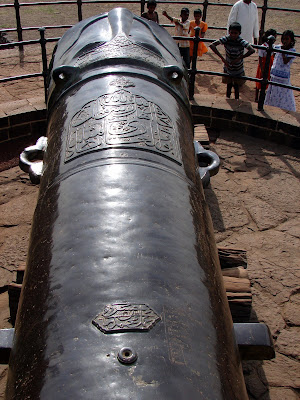 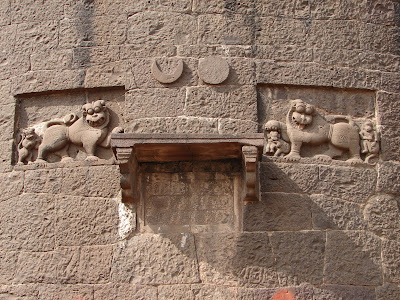 Lions on the entrance wall

This gigantic piece of curiosity was proposed to be taken to England by the Britishers but the idea was given up as impractical. (Thank heavens! Else this would have been on display with all the other "looted" Indian goodies in the Windsor Castle with the display board "Gifted by the Adil Shahi kings")The grand old gun was auctioned off for Rs. 150/- by a Magistrate of Bijapur, but the sale however was fortunately cancelled by the Satara commissioner and the Malik-e-Maidan is still there as a valuable relic on the Sherzi-Buruz, the Lion Tower, so named on account of the two heraldic lions carved in stone to the right of the entrance that leads to the tower platform on which the gun is resting. 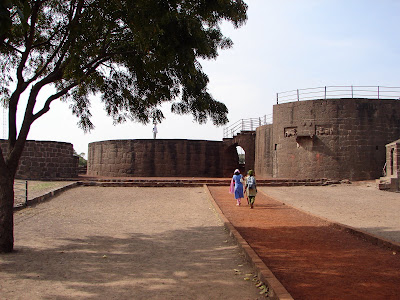 Sherzi-Buruz
Posted by Casey at 9:55 AM

that is such a wonderful pic can i use ur picture?thanks in advance

You can use all the picture(s) in this post except for the first one.