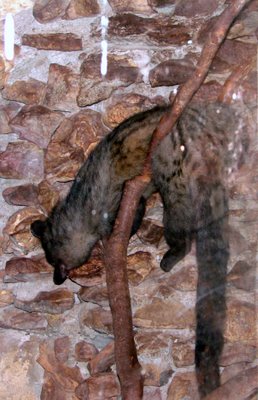 Civets are not true cats. They have a weasel-like face, cat-like body and long tails. Their fur may be grey or brown and they are marked in various patterns. They have scent producing lands that produce yellow secretion having a distinctive musky odour. Commercially they are used as a perfume fixative.

The civet in the picture is a common palm civet. This is also known as Toddy cat because of its habit of climbing the palm trees to drink the toddy that flows into jars hung by toddy collectors. It is generally balck, blackish or brownish grey. The long hairs of the coat is dark throughout. These dark areas with a contrast of paler surrounding hairs suggest a pattern of black stripes on the head. These animals are arboreal and they rest in the day on the branches of trees or curled up in hole in the trunks. They feed on small animals, birds and insects.

Legends from Andaman
The Aka-Kol and the A-Pucikwar tribes had legends that made the monitor lizard into the creator of mankind. The lizard was said to have climbed up a tree one day and found the civet cat stuck up there. After helping her down, the two got married and their off-spring were the human ancestors.

In a legend from Akar-Bale tribe, the fire was saved from the flood by a monitor lizard and the civet cat. When the monitor lizard found that he could not carry the fire up the tree, his wife civet cat took it from him and carried it to the top of the hill where she kept it safe until the rain and flood stopped.
Posted by Casey at 11:20 PM