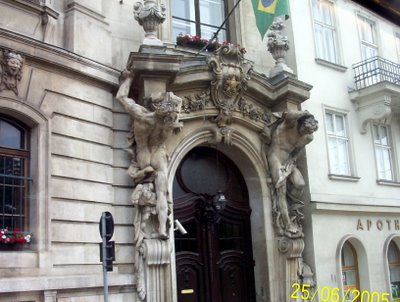 It has been more than a year since I traveled to Austria and my grey cells don't seem to be good at retaining a large amount of information :)... I have forgotten how exactly I traveled to Schönbrunn or what tram I took... I am sure a lot of you would now be saying "YAHOO!!! Thank God . She doesn't remember too much. So that should spare us from reading all the details of the travel :)"... but... I still have a great deal of information about the places that I visited in Vienna. This was the apothekery that I saw while on tram to Schönbrunn.

I got off at the Schönbrunn stop and turned to my left at the exit. I saw a sign board Schönbrunn and followed it. The road led me to the parking lot for the vehicles to the palace :). I then walked out of the parking lot and stood looking around. I stood at the corner of the street trying to figure out the right road when a group of young men walked up to me and asked "may we help you?" I was happy to hear them speak English and said "Yes Please. I want to go to Schönbrunn palace. Could you direct me please?". The young man who approached seemed to be a Chinese student. He pointed in the opposite direction and said "you walk straight down this road you will reach the palace". I thanked them and walked on. The sight ahead was breath taking! 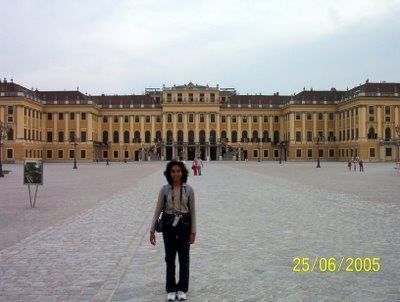 Schönbrunn Palace with its surrounding buildings and the huge park is one of the most significant cultural monuments in Austria. The castle was built to rival French Versailles in Baroque beauty and importance but House Habsburg lacked funds to outdo its rivalling nation France. In earlier times it served as summer residence to various Habsburg rulers.

Note: The following information about the history of the place has been borrowed from the UNESCO report.

The Katterburg estate, the site of the present Schönbrunn Palace, was sold in the mid 16th century by the Kiosterneuburg monastery to Emperor Maximilian II, who developed it as a hunting lodge and installed a menagerie. The buildings were badly damaged when Vienna was sacked by the Hungarians in 1605; it was not until 1622 that they were restored by Emperor Ferdinand II. After his death in 1637 the Katterburg became the dowager estate of his Widow, Eleanora of GOnzaga. The name was changed to Schonbrunn (Beautiful Spring) in 1642 when a new three storey chateau de plaisance was erected alongside the older building.

In 1683 Vienna was besieged by the Turks, Who were finally crushed, but not before they had Wrought great destruction in the surroundings of the city, including Schönbrunn. During the great rebuilding that followed the siege, Emperor Leopold I commissioned the Italian-trained architect Johann Bernard Fischer von Erlach to
design a new building there as a residence for his heir, Grand-Duke Joseph. His first design is now thought to have been prepared simply to demonstrate his capabilities. In this he was highly successful: his design was greatly admired and was to secure him many other commissions.

Emperor Franz Joseph (ruled 1848-1916), who was born here in 1830, spent the last years of his life entirely in Schönbrunn. In 1918, the palace became the property of the new republic. Due to this historical importance, its beautiful location and its gardens this palace is one of the very top sights in Vienna. Furthermore the entire complex was added to the UNESCO's world cultural heritage list.


Schönbrunner Schloßpark
Schönbrunn Palace is the former Habsburg summer residence. In 1695 Fischer von Erlach sr. was asked to design a palace that could match Versailles. His plan turned out to be too costly, so Schönbrunn was constructed a bit more sober initially.

Empress Maria Theresia choose Schönbrunn as her main residence. She added the theatre and the garden to make her stay more enjoyable. And inside, she refurbished the rooms in baroque and rococo style. 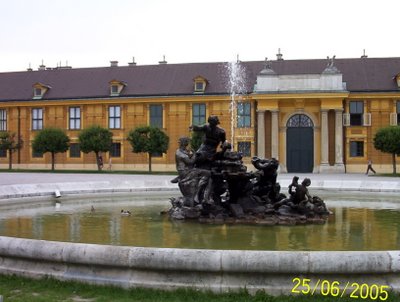 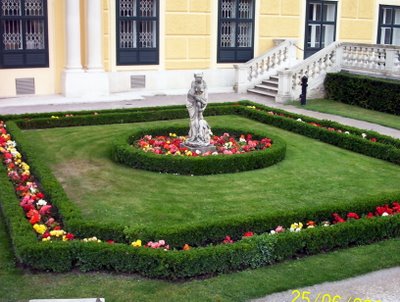 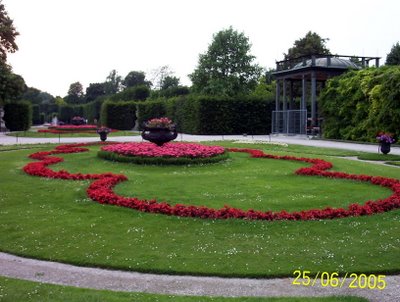 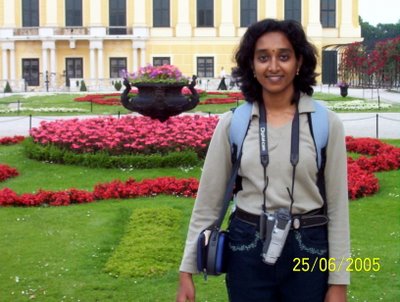 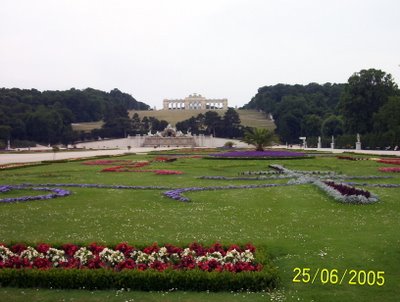 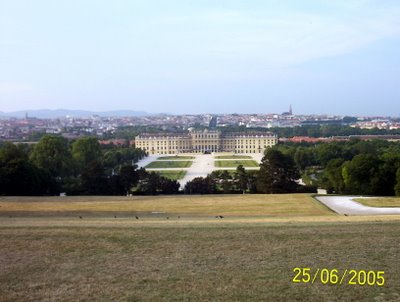 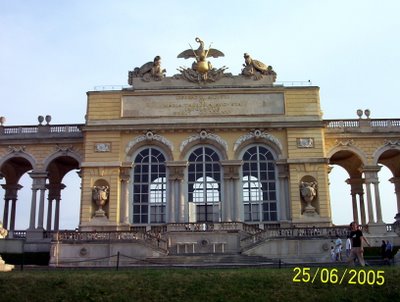 The Gloriette was built in 1775. Today, the inscription of the middle part of the building still bears witness: "JOSEPHO II. AUGUSTO ET MARIA THERESIA IMPERANTIB. MDCCLXXV" (Erected 1775 under the reign of Emperor Joseph and Empress Maria Theresia). Even then, one appreciated beautiful views - and for that reason a 20-meter-high observation terrace was created (accessible only via a spiral staircase).

Today, Café Gloriette is housed in this splendid building. Every Sunday morning, there is a brunch with live music ranging from the classics to jazz. 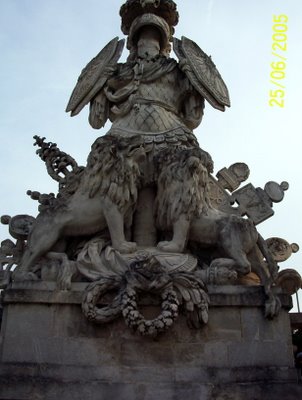 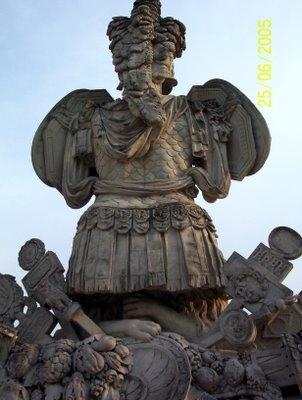 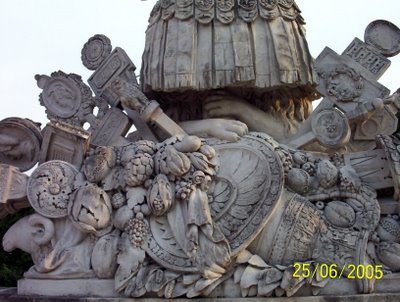 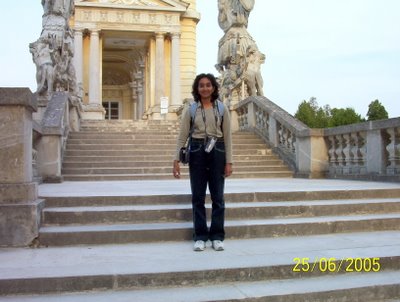 Sited at the foot of the hill behind the palace and designed as the crowning element of the Great Parterre is the Neptune Fountain. It was conceived as part of the overall design of the gardens and park commissioned by Maria Theresa in the 1770s. Excavations for the pool began in 1776 and the fountain was completed four years later, just before the death of the empress. It was very probably designed by Johann Ferdinand Hetzendorf von Hohenberg, while the sculptural group of Sterzing marble was executed by Wilhelm Beyer. 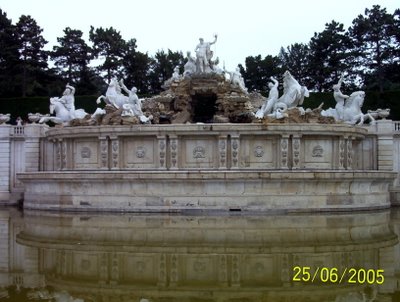 A rocky landscape is peopled with the sea-god Neptune and his entourage. At the centre of the figural group above a rocky grotto stands Neptune in a shell-shaped chariot, his trident in his hand. To his left is a nymph, while on his right kneels the sea-goddess Thetis, entreating Neptune to favour the voyage of her son, Achilles, who has set off to conquer Troy. Frolicking at the foot of the grotto are the Tritons, creatures who are half-man and half-fish, and belong to Neptune's entourage. They hold conch shell trumpets with which they can inspire fear in both man and beast, and are restraining the hippocampi or sea-horses who draw Neptune's chariot across the seas.

Neptune driving across the seas in dominion over the watery element is a common motif in 16th to 18th-century art, being used as a symbol for monarchs controlling the destiny of their nations. The figural group was originally free-standing, but a screen of trees was planted behind it during the 19th century to provide a foil. 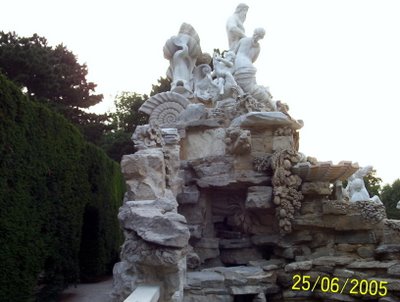 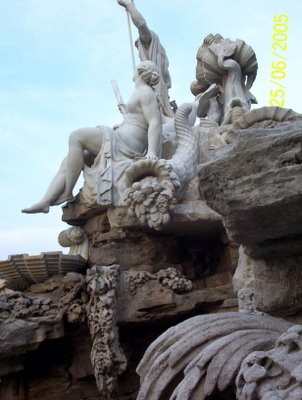 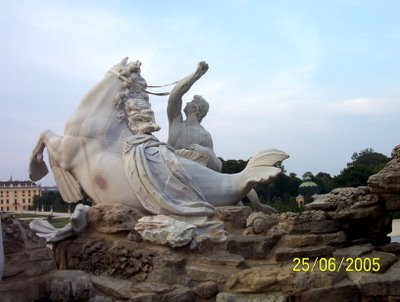 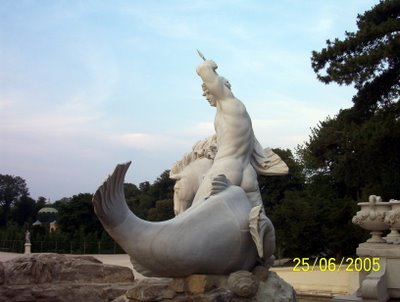 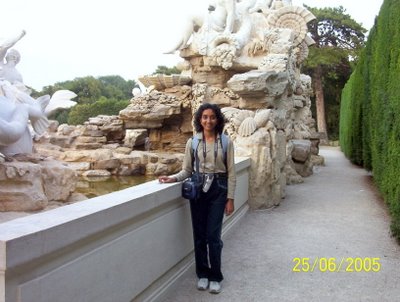 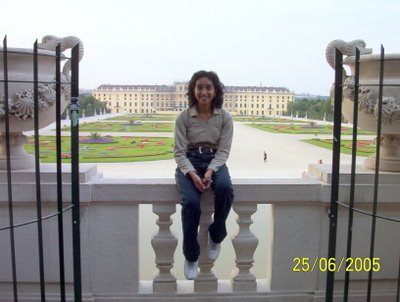 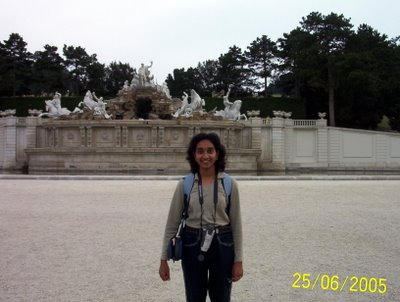 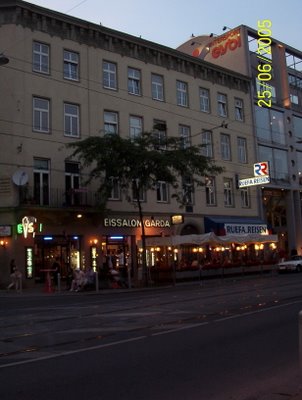 I sat in the garden for a long time. My first day in Europe was truly memorable. The next day I had to go to Salzburg. So though I didn't really want to return to the hostel, I had to :(. I returned to the hostel and had my dinner which consisted of chapatis and chutney that I had taken with me from London :). While having my dinner in the hostel garden, I met an interesting group of travelers. A girl from Hawaii whose name was rather too difficult for us to pronounce :) and so just called her Miss Hawaii, a student from USA and another student from London. He was an Indian by ethnic origin but was born in London. He called himself "D-raaaj" (it was quite obvious that his parents had named him Dhiraj :).....and after living in London for almost 20 years he couldn't say his own name in the right way). We spoke for a while and they exchanged email ids. I wasn't keen on meeting any of them again :) or keeping in touch with them either. So I excused myself saying that I had to take an early morning train to Salzburg and retired for the night.
Posted by Casey at 9:54 PM

I guess they don't let you photograph inside the palace... i wish they wud let it ....
and u look cool in closeup photu...

It's a pity that they don't let you take pictures inside the palace :(. Thanks for the compliment :)