The tour of Bhubaneswar city was to begin at 9:00AM from Pantha Nivas. It was 6:30AM and we had sufficient time to visit Raja Rani temple before the tour commenced. We enquired the directions to Raja Rani temple at the reception and learnt that it was situated about a km away from Panth Nivas. As we walked down the Lewis road towards Raja-Rani mandir, we also looked out for an ICICI cash point to withdraw money. My friend had run out of money and I had sufficient money to sustain myself for the next two days. The previous day the computer at the cash point had a problem (or probably there was a problem with the network???) and 'U' wasn't able to withdraw money. As we approached the cash point we saw a lone customer returning without withdrawing money. It appeared that the problem had not been resolved yet.

We walked further down the road and asked a few locals for the directions to the temple. We were misguided once by a vendor of tender coconuts. A teenager who probably was a college student was walking in the same direction and she offered to walk with us to the temple. We thanked her and walked into the temple garden. We had to buy an entry ticket to see the mandir. Though there was a ticket counter, there wasn't anybody to issue us the entry tickets. 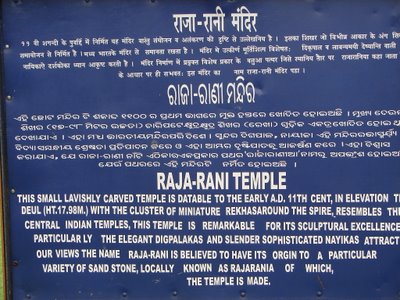 The temple looked stunningly beautiful from far. The Kesari rulers are to be credited for creating this architectural wonder. The Kesaris ruled Kalinga for about 200 years from 9 AD till the advent of the Gangas in 1112AD. The Kesaris were massive builders. Some of the brilliant specimens of Orissan Temples like Lingaraj, Mukteshwar, Rajarani and Brahmeswar were credited to them. 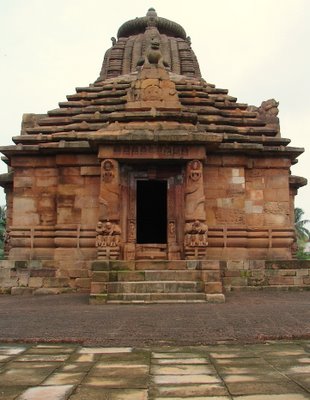 The speciality of this temple is that it has no presiding deity. This temple has been mentioned in few ancient Sanskrit texts. Some scholars believe that the temple was dedicated to worship of Lord Shiva and was known as Indreswara temple. There is also a popular belief that it was the Siddheshwara temple in bygone days. Though I have never been to Khajuraho, I have heard that the temple has family resemblance with Kandariya Mahadeva temple of Khajuraho. The name 'RajaRani' sounds rather too uncommon considering the fact that all the major temples in and around Bhubaneswar have suffixes that link them directly with Lord Shiva. 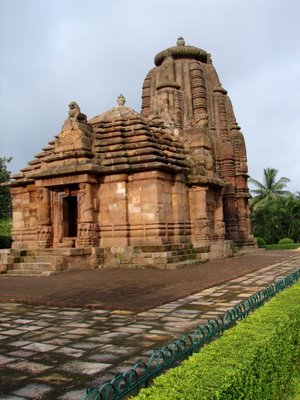 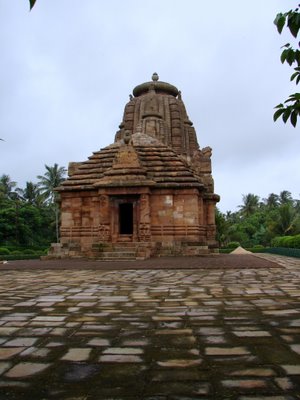 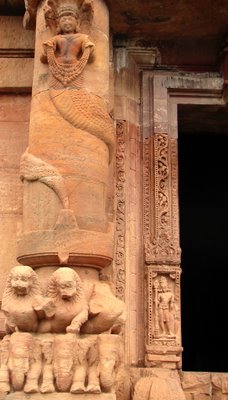 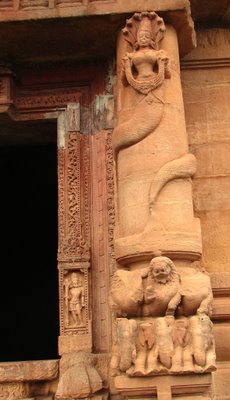 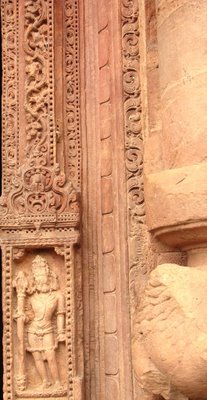 The entrance is guarded by a pair of identical door keepers. They have matted locks on head and carry tridents in hand which make it easy to identifyf them as Shaivite dwarapalakas -- Chanda and Prachanda.


There are ashta dikpalakas(guardians of the eight directions). Indra holds his thunderbolt and guards the east. 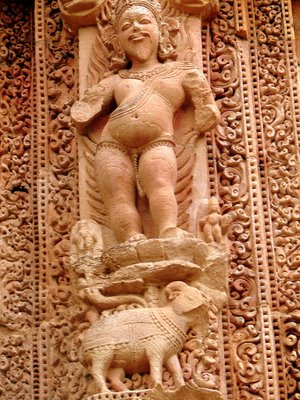 The pot bellied and bearded Agni controls the south-east. 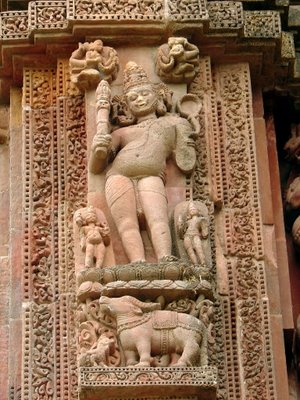 Yama with his staff and noose in hand and his carrier bufallo protects the south.

Nritti is poised over a prostrate body and holding a sword and a severed head guards the south-west. I do not have the picture :( as I wasn't able to locate it :( 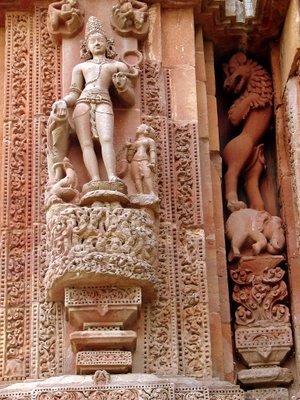 Varuna with a noose in his left hand and his right hand in Vara mudra and his mount makara (crocodile) besides him, preserves the west.


Vayu holds a banner and is placed in the north-west. Kubera with seven jars of nidhi keeps vigil in the north and Ishana with an emaciated figure by his side protects the north-east. Unfortunately, I don't have the pictures :(.

The temple has exquisite carvings of delicately poised nayikas. The slender waisted figures, languorosly poised, reflect the wealth of feminine charm. There are also nymphs or the embracing couples. There are the carvings of women playing with children or playing with pets or attending to their daily chores. 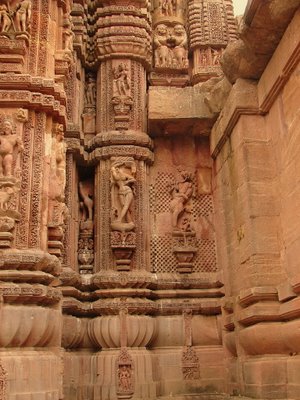 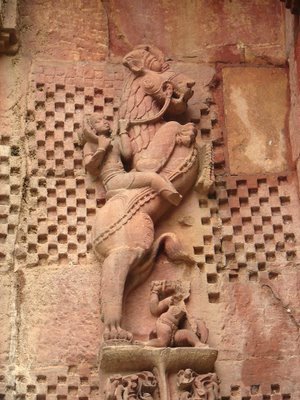 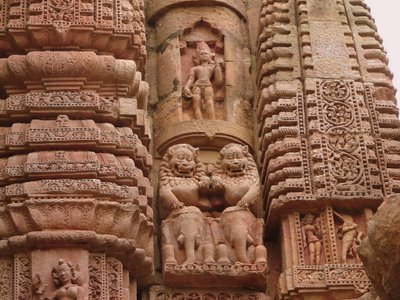 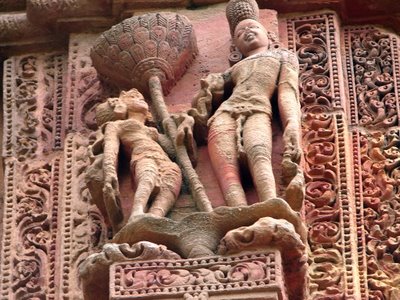 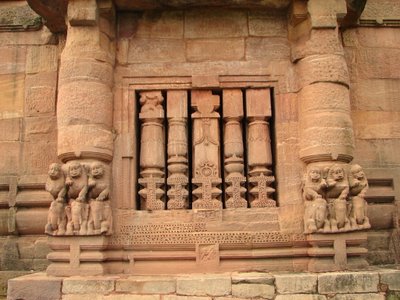 A few men were exercising in the park. A few women who had finished their early morning exercises sat besides the temple and began talking. Though the women were conversing in Oriya and I couldn't understand the exact details, I think what they were trying to decide was to which part of the country we belonged. 'U' told me that they thought 'U' was from Bengal. But I'm sure I heard the word 'Madras' in their conversation. Well, to most of the people in our country who live in the North, South India is just Madras and all the South Indians eat only Idli and Dosa! The knowledge of the North Indians is so limited that they cannot differentiate between the states in the South. It is sad but true. We both have all the defining features of the Dravidians and I am sure the women would have noticed that!

By then I saw an officer at the ticket counter and we went back to buy our entry tickets. We returned to the temple and took some more pictures. 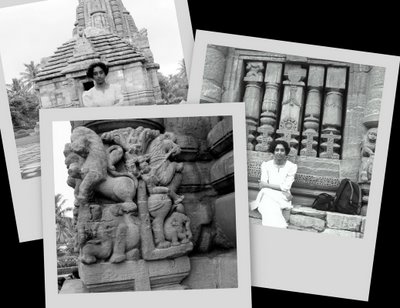 It was 7:30AM and we had to take the guided tour of Bhubaneswar city at 9:00AM. We had just enough time to return to the hotel, have our breakfast and check out of the hotel. We finished our breakfast at the Panth Nivas restaurant and checked out. We kept our baggage at the reception and boarded the bus. We were on our way to "Nandan Kanan"...
Posted by Casey at 8:49 AM