Pages from the History of Royal families 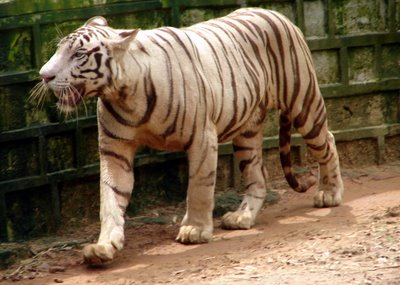 The earliest record of a white tiger captured was in 1820 at Exeter Change.

In December 1915, Maharaja Gulab Singh of Rewa caught a 2 1/2 year old white cub. He kept the tiger in captivity for five years and then gifted it to King George V as a sign of loyalty to the crown. Till date, white tigers are kept at the Maharaja's summer palace at Govindgarh.

Maharaja Shri Marthanda Singh was hunting in the jungles of Bandhavagarh (Central India) in May 1951. He received a report that a tigress had been spotted with her 4 cubs and one of them was white.

The next day a search party with beating drums, cans, firing shots, trumpets and blasts was organised to find the tigress. Unaware of the threat the tigress approached them when the maharaja was seated with his guests. She and her two cubs were shot. Luckily the white cub escaped.

There was no sight of the white cub the next morning, but pug marks were sighted near the kill made by the mother. The cub after feeding had hidden in the rock crevice. A local carpenter made a drop-cage and placed it near the exit of the crevice. They used water to lure the helpless cub out of the crevice. Several hours later the cub came out to drink water and was captured. He was returned to the Maharaja's 150 roomed palace. He was kept in a large open courtyard.

Only 3 days after the capture the cub managed to escape again. A long hunt was organised. The search party used a net to capture the cub that only resulted in mauling. When the cub again attempted to attack, he was clubbed hard on his head and he lay unconscious. The search party men tied his legs, caged him and carried him back to the palace. The cub was reintroduced to a repaired courtyard where he lived for the next 19 years and 7 months. He grew up to be the famed Mohan.

Mohan was bred to a wild-caught orange tigress Begum. Her three litters contained only the normal coloured cubs. She was sold to the Ahmedabad zoo. Mohan was then bred to Radha his daughter (Thats right. Bred with his daughter!!! shocked? Wait till you read the next section on "Ancient Egyptian History") from the second litter. This resulted in four white cubs Raja, Rani, Sukeshi and Mohini. Radha then went on to give birth to 13 white and 9 orange tigers.

Mohan's children Raja and Rani were gifted to National Zoological Garden in Delhi. They were bred to produce 20 cubs all of which were white.

Mohan and Begum's fourth generation offspring Badal was bred with Seema at Kanpur Zoo on 29th August 1979. But this was not successful. She was then bred with Sheru a notorious man-eater from Corbet National Park. She delivered Sanjeev, Uttam and Johar of which Johar was white. Contrary to the accepted Mendelian's hereditary principles of Genetics, white offspring had been produced though the father (Sheru) and mother Seema were normal coloured homozygous.

It was a common practice in ancient Egypt for the queens to marry their brothers. There was a complex interrelationship between husband-wife, brother-sister etc. As a result, rulers in Egypt were generally succedeed by the individuals that they designated as heirs.

Heirs were almost always sons of Pharoh and his "Great wife", his most favoured wife and usually the first he married. This selected son of the Pharoh and his Great wife was typically designated as the heir via marriage to the "First Daughter", Pharoh's most royal female child, the eldest eligible daughter of his most favourite "Minor Wife". Thus many queens married their half-brothers. Cleopatra and Hatshepsut married their half brothers. 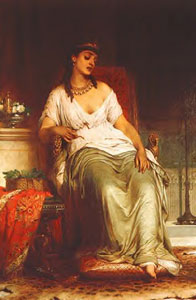 Cleopatra VII's (popularly known as Cleopatra) father was exiled following a rebellion and her older sister took the throne. Her father reclaimed the throne on his return and Cleopatra's sister was put to death. Her sister Cleopatra VI mysteriously died around the same time. About 4 years later her father died and as the oldest child in her family Cleopatra took control of the throne at the young age of 17. In keeping with the ancient Egyptian tradition Cleopatra married her brother Ptolemy III who was 12 years old.


Thotmose Royal Family
Amen Hotep-I's daughter Ahmose married her half brother Thotmose-I. He was the son of Seseneb. Some historians argue that he was not Amen Hotep's son but a general in the army. All sons of Thotmose-I and Ahmose died young. At his death only his daughter Hatshpsut was alive. Thotmose-I had a son from his own daughter "Mut Nefert". Hatshepsut married this illegitimate prince who later came to be known as Thotmose-II and ascended the throne.

Thotmose-II had a secondary wife Isis. Hatshepsut bore Thotmose-II only two daughters Nefru-Ra and Merit-Ra-Hatshepsut. Nefru-Ra married her half brother (son of Isis and Thotmose-II) and the prince ascended the throne with the title Thotmose-III.
Posted by Casey at 9:45 PM