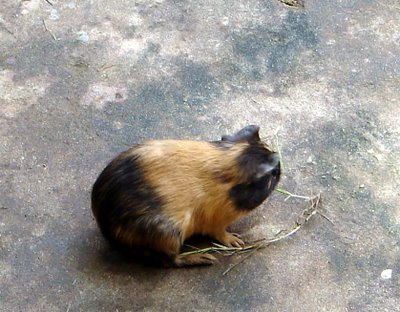 Pups are well developed, including fur, teeth, claws and full eyesight when they are born. Males may demonstrate courtship behavior in the second or third week after birth. Unlike other rodents of the similar kind, they mate for life in the same pair bond.

Origin of term "Guinea Pig"
Guinea pigs are neither pigs nor do they come from Guinea. Some think that some of the sounds these vocal animals make remind them of pigs. They are also built like a pig with a large head relative to the body, a stout neck, and round rump with no tail and they spend large amount of time eating.

They were first domesticated in 2000BC for food by the mountain tribes in the Andean region of S.America. Dutch and English traders brought the Guinea pigs to Europe where they became popular as exotic pets.

The term "guinea" in guinea pig is even more difficult to explain. One theory suggests that the animals were brought to Europe via Guinea and hence the term Guinea. Another theory suggests that the term is a corruption of "Guiana", an area in S.America. Common misconception is that they were sold as a closest thing to pig one could get for a guinea (Old British coin whose value was 21 shillings)
Posted by Casey at 8:01 PM