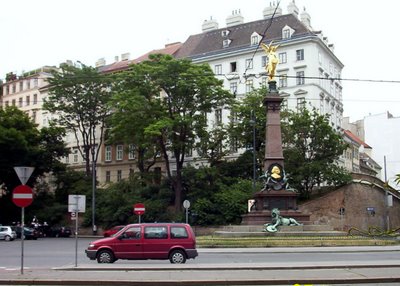 Rathaus Plast was an amazing building and I could spend a couple of hours marvelling at the building. But I had to see lot more places yet. So I walked up the road for a little distance to see if there were any more architectural wonders. I saw this beautiful statue at the square. I neither remeber the name of the sqare, nor do I know the name of this pillar. It looked simply too beautiful to not capture it in the camera. 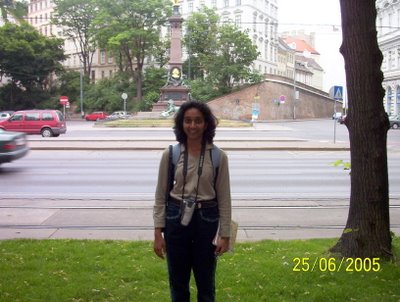 I had read on the internet that the gardens near Rathaus Plast also attracted a lot of tourists. They probably look beautiful during spring and it definitely wasn't spring yet. I didn't find them interesting. I took the tram to Belvedere. The tram passed by another interesting building. I pulled out my camera... oops... sorry... pulled out Robin's camera and took a picture of it. It was the Vienna State Opera house -- Staatsoper.

Vienna State Opera House is one of the world's largest and most splendid theaters. Under the law, the Austrian Republic is required to ensure that full use is made of its famous opera house, and so there is a different opera or ballet on the program on 300 evenings in the year.

The Viennese obsession with music goes far back into Habsburg history. The first recorded Viennese Court opera was performed in 1625, on the occasion of the birthday of Ferdinand II, on the Hradschin or Prager Burg, where the Emperor resided for six months. In 1660 Leopold II, probably the greatest music-lover and theatrical devotee of the Baroque period, had a smart theater built on the square in front of the Court Riding School in 1660-62. After 1668 numerous operas were performed, first on the site of the present Österreichische Nationalbibliothek, then in the Redoutensälen and in the old Burgtheater on Michaelerplatz, where Mozart's "Il Seraglio", "Marriage of Figaro" and "Cosi fan tutte" were first performed, and subsequently in the Kärntnertor Theater, where Weber's "Euryanthe" had its unhappy première and Beethoven's "Fidelio" began its series of triumphs in 1814. A few years later the first performances in Vienna of works by Rossini and Verdi ushered in a period of euphoria for Italian opera. After the destruction by fire of the Ringtheater the opera moved to its new home on the Ringstrasse in 1869. 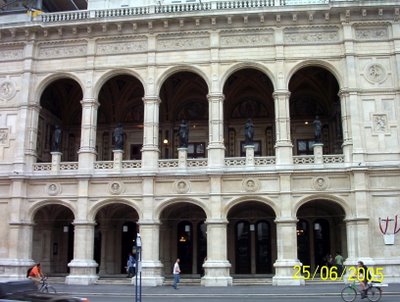 The vast Opera House with its clearly defined structure is in the French Early Renaissance style. A contest was held in 1860 to come up with a design for the building. It was won by two professors from the Imperial Academy of Fine Arts. They divided up the work so that August Siccard von Siccardsburg handled the engineering, and Eduard van der Nüll was in charge of the decorative elements. Construction of the building took its emotional toll. An urban legend states that the opera was supposed to be much higher than it currently is, but rushed planning of the Ringstraße left it at the same height as its neighboring buildings. van der Nüll is said to have killed himself because he let the Emperor down. Siccardsburg died just two months later, in 1868, of grief. Neither architect lived to see the day.

It was built between 1861 and 1869 to plans by August von Siccardsburg and Eduard van der Nüll. It opened on May 25 1869 with Mozart's "Don Giovanni" and a prologue spoken by the popular actress Charlotte Wolter. The Opera House was hit by bombs on March 12 1945 and gutted by fire. Reconstruction was not completed until 1955. The second inauguration of the "Opera House on the Ringstrasse" took place on November 5 1955, when Beethoven's "Fidelio" was performed.

Today most of the Neo-Renaissance building is only decades old. The outside walls, the façade, and the grand staircase were the only portions to survive a direct hit by an Allied bomb during the Second World War. The interior is a reconstruction. Though it attempts to capture the grandeur of the original building, an exact reconstruction would have cost too much. Still, the Staatsoper is symbolic of Vienna's emergence as one of the world's cultural capitals.

Inside, the Grand Staircase is a sweeping expanse of chandelier-lit marble decorated by statues representing the seven liberal arts. Outside, there are five alcoves built into the façade. Each houses a bronze statue by Ernst Julius Hähnel representing Drama, Fantasy, Heroism, Humor, and Love. The building is flanked by fountains by Hans Glasser. Even today, the opera house is the center of social activity in Vienna. The directorship of the opera is considered one of the most important positions in Austria. Even more so than the president of the nation. It is for that reason that there is always lots of controversy and intrigue surrounding the post.

The Opera House was the first building erected on the Ringstraße when the old city's fortifications were torn down and replaced by massive public works projects.

do u have the close up of hte first photo ?

Vin, Sorry I don't have :(. The camera I used was a low end one and I couldn't zoom either.