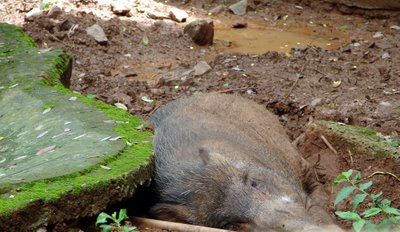 Wild boars are the wild ancestors of the domestic pig. They live in groups called sounders consisting of 20 - 50 animals. Adults are part of the sounders only during autumn breeding season. The boars are nocturnal. They have thick, short bristly coats ranging from grey to black.

In the Vedic literature Varaha was related to two different myths: the boar myth, in which the boar served as the sacrificial animal (yagna) and the cosmogonic myth. In this myth Varaha is not yet associated with Vishnu but with the Vedic god of creation: Prajapathi. It was Prajapathi who 'saw' the earth in the primordial waters while he moved in them as the wind. With his tusks, he took the form of Varaha in order to lift the earth from the waters, establishing a primary creation.

Later, in epic-puranic literature, Brahma takes over the creator function from Prajapati; so it is Brahma who takes the form of Varaha in order to lift the earth again from the waters, or as it is sometimes expressed: from the nether world (patala), where it had sunk after the earth's destruction by fire and deluge at the end of that certain world period (kalpa). Hence, Varaha's act of lifting the earth is no longer a primary creation, but has become a 'secondary' creation, a periodical act of renewal serving to establish the world anew, again and again.

The Brahma character of the myth, however, will change under the influence of expanding visnuism: Varaha is seen as a creator form of Visnu. Besides, some late-epic and puranic texts show an innovation in the cosmogonic myth: now Varaha has not only re-established the earth but also killed the demon king Hiranyaksa who lived in the nether world and had conquered the gods.
Posted by Casey at 9:57 PM

oh my God!! look at the speed at which u r blogging.. i will catch up okie !!

aayee!! y is my comment under anonymous ??? i was loggedi n when i commented.