I walked along the Burg Ring and realised that there were just too many museums and I simply didn't have enough time on hand to visit them. So I just decided to stroll alongside :) the museums and then familiarise myself with the names of at least a few and then tell people when I go back home "Ah... the Kunsthistorisches Museum?? I know that museum. I've been to Vienna. " :) But then I realised it wasn't worth spending a lot of time walking around the museums. So I decided to walk further up the road and see what else would interest me. For the second time in life I was refraining from entering the museums. That's a pity :( a'int it? :(...


I walked further up the road and saw a building towards my left that was being renovated. It looked really nice. I walked up to the building to take a closer look. I was disappointed that it was almost covered to the top to prevent the dust and any other building material from being strewn on the streets. I looked at the map and realised it was

I know you have guessed it ... :) ... Yes!!! It was the Austrian Parlament [parliament house]. It wasn't half as nice as our Vidhan Soudha :) but wasn't too bad either.

This building was originally designed as the parliament building for the Habsburg Empire. It now serves as the Austrian Parliament building. The architecture is Greek, decorated with statues of Greek and Roman historians, statesmen, and scholars. The most prominent statue is of the Pallas Athene, the goddess of wisdom (Athenebrunnen). Hansen came under fire for his design, and defended it by saying, "The ancient Greeks were the first people to love the freedom and regularity above all, and it was their style which besides its pronounced severity and regularity permitted a great liberty of development." He was later given an architecture studio within the building to continue his work after retirement. This is the site where, after the collapse of the Hapsburg Empire, the republic of Deutsch-Österreich was formed. Half of the building was destroyed by World War II. Some of the artwork damaged during the war is only now starting to be restored.

Wish I could take a picture or two. But I couldn't :( as the dust protection covers blocked the view.But my determination was not to be deterred so easily...:) ... I walked around the building and entered the small street besides the parliament house and I finally took one picture that I could treasure :). 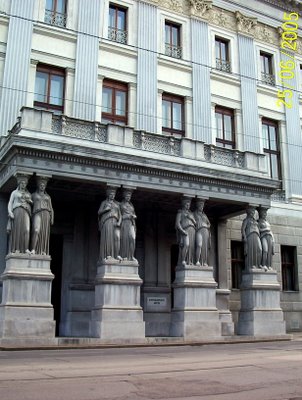 I walked further up the road and noticed a beautiful building to my left. I looked it up in the map and it was indicated that the building was Rathaus Platz or vienna city hall. 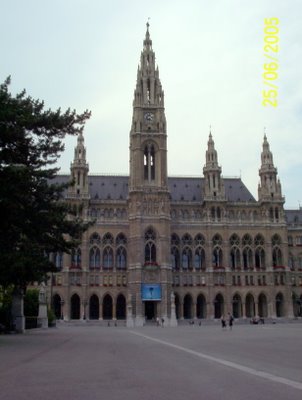 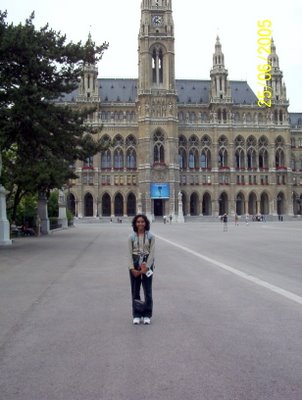 I didn't have sufficient time to actually see the interiors of the building. Was satisfied looking at it from the outside :). I had just for a day in Vienna and if I had to see all the major sights of interest then I couldn't afford to spend time actually going in and marvelling at the architectural splendour. O well... that is how I try to console myself :).

I better not hear "O... didn't you see the building from the inside? It is wonderful... yada yada yada" from any of you guys who have visited this place. 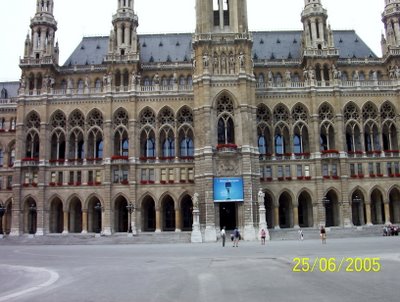 This is the information I got on the net about this marvellous building...
Friedrich von Schmidt, who had been the architect of the Cathedral of Cologne, designed and built Vienna's City Hall, the most important secular building in the neo-Gothic style in the city, between 1872 and 1883.
The tower measures 321 feet, not including the "Iron Knight of City Hall" (Eiserner Rathausmann) who measures almost 20 feet to the top of his pennant. This knight on top of the tower has become one of the symbols of Vienna.

The Vienna City Hall is the seat of the mayor and governor of Vienna ( with Vienna being both a city and a state since 1922, these functions are combined in one person ), of the City Council and of the Assembly.

It also houses the Municipal and State Libraries and Archives which hold many key documents of Vienna's history and a large collection of local memorabilia.

On both sides of the approach from the Ring ( closed to motor vehicles ), statues honour personalities who left their mark on the history of the city.

The Park of City Hall (Rathauspark) is a very attractively laid-out garden with two fountains and several interesting monuments, among them the memorial to the painter F. G. Waldmüller and the statues of two great composers of waltzes, Johann Strauss Father and Joseph Lanner. Facing the Burgtheater across the Ring are monuments to President Theodor Körner (1873-1957) and Mayor Karl Seitz (1869-1950).

what is dust protection covers ?