A day in the Land of Mozart - Austria 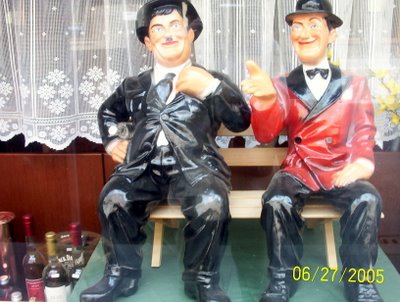 Salzburg, is home to one of Europe's most famous beer destinations: Augustiner Bräu. For centuries, monastic orders like the Augustinians preserved the ancient art of beer making. The monks were craft brewers in the literal sense: they relied on scientific principles, and paid strict attention to quality. Some of Europe's finest beers have their origins in monasteries.

The Augustiner monastery was founded in 1605 by Wolf Dietrich, Salzburg's prince and archbishop. Dietrich was, to say the least, a larger-than-life character. Like a true prince of the Holy Roman Empire, he ruled the city with an iron hand, and spent lavishly on the arts. And he didn't let his religious vows get in the way of earthly pleasure. He had 15 children by his longtime mistress, Salome Alt, and built the lavish Mirabell Palace and Gardens in her honor.

In 1835, the emperor handed the monastery over to the Benedictine order, who decided to cash in by inviting the public to drink their beer. The residents of Salzburg have flocked there ever since.

A visit to Augustiner monastery didn't interest me as I don't drink. A climb to the monastery would only be a waste of time. So I just walked almost up to the monastery on the eastern bank of Salzach river and turned back. I took this picture as a memorabilia of my walk.

Salzburg´s Getreidegasse is the most famous street of the city, and therefore is the most crowded. The charming old houses have pretty portals and wonderful courtyards. The Getreidegasse is famous for the whrought signs from the 16th to the 19th Centuries. The design of the signs dates back to the Middle Ages. It is worth taking a second look at the houses because they are adorned with dates, symbols or the names of their owners, so they often tell their own history. 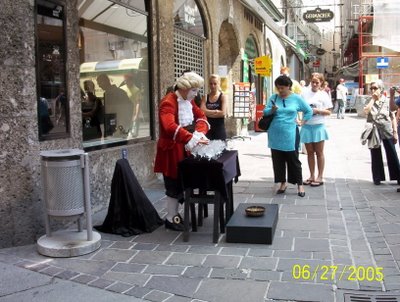 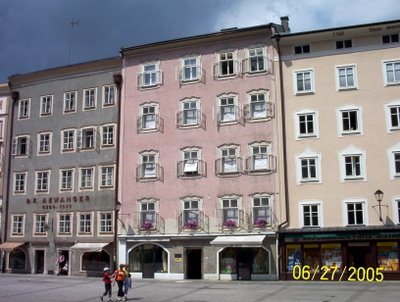 Salzburg is Austria’s fourth largest city and lies 436 m above sea level. Salzburg is divided by the river Salzach. Its two sides are very distinctive from one another: On the south side of Salzach you will find the "Oldtown" of Salzburg underneath the Mönchsberg and the Hohensalzburg Fortress. North of the river you will find the Kapuzinerberg and the baroque Castle Mirabell with its beautiful garden. I had a lovely walk through the old town of Salzburg and crossed over the bridge on to the new town side. 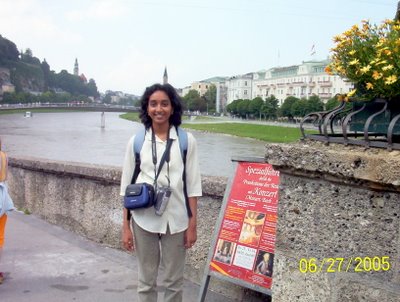 Though I am not a fan of Mozart I couldn't resist visiting Tanzmeisterhaus -- the house where Mozart spent a few years of his life. I walked around the place for a while and also visited the garden in front of the house. I saw this beautiful building in Marktplatz a little further from Mozart's house. It appeared to be a concert hall but I am not certain about it. 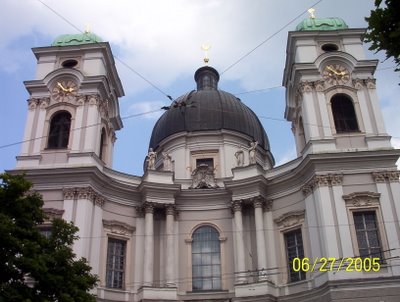 Marktplatz is just a stone's throw away from Mirabell garden where I had begun my journey earlier in the day. I went back to the garden and sat on a bench for a while before leaving to the station to take the train back to Vienna. While in the garden I heard a family speaking "Kannada" and I was excited. I heard them referring to "Jayanagar" and "Malleswaram" in their conversation and my joy knew no bounds. The family was from Bangalore, my hometown :). They were six people: two elderly men, an elderly woman, a young couple and a little boy aged about two years. I walked up to them and tried to speak to the young man. He gave me a weird look and walked away. I smiled at the young woman who seemed to be his wife and asked for the directions to the railway station in Kannada. She literally jumped with joy when she heard me speak in Kannada and asked me if I was from Bangalore. I said I was and she told me that her husband, a software engineer worked for a company in a nearby town and they had come to Salzburg with her parents to spend the weekend. She gave me the directions to the railway station and I thanked her. 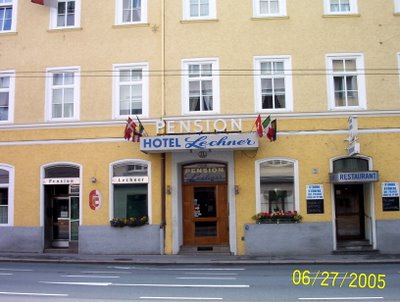 I bought an icecream cone in a shop beside the main road and walked towards "Bahnhonf" -- the railway station, relishing it. I noticed this interesting signboard and an equally intersting traffic signal. I wonder what "KISS&RIDE" :) means. 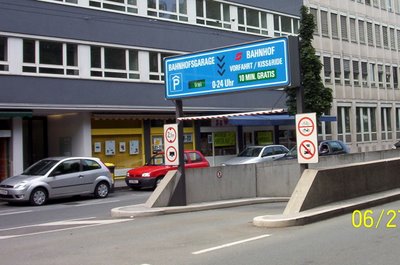 The journey back to Vienna was for 3Hrs and 45 Min. I reached Wien Westbahnhof station at 8:30 PM, had a croissant and a cup of cappuccino in Caffé India. My first visit to Europe was indeed memorable. I returned to the hostel, packed my bags and slept. I had to take the airport service bus at 5 O' Clock early next morning. 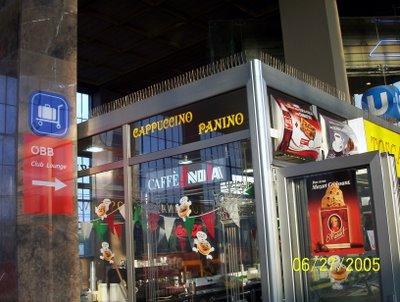