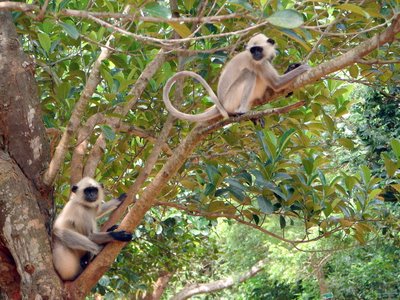 The legend of the sacred monkey traces back to more than 20 centuries. Hanuman leaped to Srilanka to rescue his master's abducted queen and set the palace on fire with his tail. This fabled deity is still worshipped by the Hindus for his heroic deeds.

Scientically these monkeys are known as Semnopithecus entellus and they are commonly known as Hanuman Langurs. The name 'langur' is derived from the Sanskrit term 'Langulin' which means 'having a long tail'. These long tails (upto 3 feet or more) help them balance on high branches.

These langurs are able to survive in a diverse range of environments, from the brutal hot sands of the Thar desert to the snow capped Himalayas. Sara Hrdy, an anthropologist at the University of California - Davis explains that "they can live on anything, even strychnine". Like all leaf-eating (colobines) monkeys, Hanuman monkeys have "sacculated" stomachs that can break down plant materials like mature leaves, unripe fruit, seeds and bark. Their stomach has anaerobic bacteria colonies that digest cellulose. They can even survive on poisonous "Lantana camara" that are even kill a horse. In the evergreen forest of Ramnagar, they survive on fruits and young leaves during monsoon. They also feed on protein rich caterpillars. During winter, they survive on flowers and dry fruits of a large climbing liana. During spring they eat any plant that they can find. 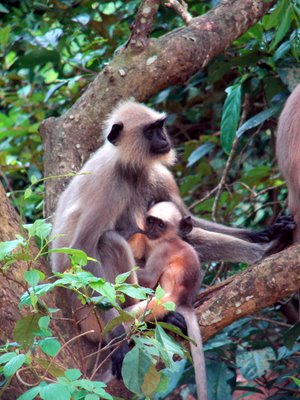 The langurs spend most of their time on the trees to escape from predators like tigers, wolves, wild dogs, hyenas, leopards and pythons. The highest ranking male sits at the top of the tree. The females with babies sit below the male followed by the younger females. The riskiest posts at the base of the tree are usually occupied by the adoloscent males. Sub-adult males are eventually kicked out of a troop to avoid inbreeding. They then join other troops to form a group of bachelor males. The females stick together in a single territory for their entire lives, while the males time in the troop is short-lived.

The bachelors roam around testing the males with harems. When they see a weakness they attempt to takeover. The bachelors rush into the troop whopping and the alpha male responds to the call and combats. The war ends when the bachelors retreat or drive off the alpha male and seize the command of the troop. The strongest member of the bachelor group evicts his fellow comrades and gains full control of the troop. Sometimes the succeeding male snatches the unweaned infants from their mothers and sinks his canines into their skulls. Such infanticide was first documented in 1960s by the Japanese scientists doing their research in India.

Sara Hrdy explains that the infanticidal males cancel the female's last 'choice' and forces her to choose him instead. The mother becomes fertile sooner if she stops nursing and increases the new male's chances of breeding with her. This is linked to Darwin's theory of sexual selection which states that males will compete for the fertile females with the females choosing the best male.

The females will stick together and fight the males trying to snatch the infants. A female will support her sister, cousin, aunt expecting that they will support her in times of need. The females seem to be evolving new strategies. They have noticed that a male is hesitant to kill his own offspring. The females take advantage of this behaviour and so mate with a variety of males outside the troop besides the alpha male.
Posted by Casey at 8:01 PM