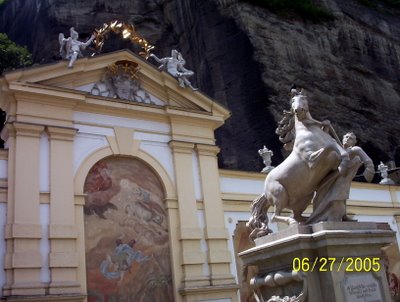 The Pferdeschwemmen -- Horse well, was built by Fischer Van Erlach (who is aso responsible for the Trinity Church) along with the front façade of the royal stables in 1693. The centre of the well is decorated by a statue named "Der Rossebändiger" -- "horse tamers", the work of Michael Bernhard Mandl. It was formerly located in an oval basin axial to the portal of the royal stables. A palace façade with depictions of horses was located behind it. 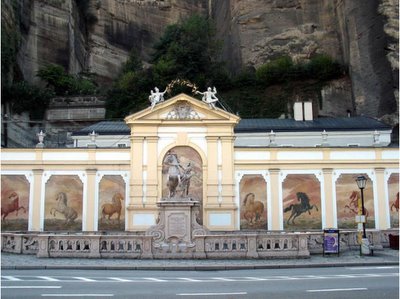 In 1732, the horse pond was restored under Archbishop Firmian. The group of horse tamers was turned by 90 degrees and given a new pedestal. The basin was enclosed by a balustrade. Joseph Ebner painted horse fescoes on the rear wall in the style of Stradnus' engraving "Equite seu speculum equorum"

The well was initially built to give water to the patrician's and Prince Archbishop's horses. Around 1700 horses in the archbishop's riding school bathed here before going to the stable across the street. 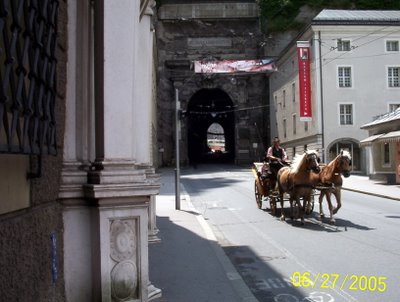 For 2000 years, the Norik Horse ( Noriker, Norisches Kaltbult, or Pinzgauer) has lived in Austria. Named after the Roman province of Noricum, they descend from an ancient Celtic horse that bred with heavy Roman draught horses. The breeding of Norik horses flourished under Charlemagne in the 8th century. The first stud farm that bred Norik horses was not until 1576 near Hallein and was under the control of the Archbishops of Salzburg who used the Noriks primarily as ceremonial or parade horses, with the colorful specimens especially popular. The frescos in Salzburg of the "Pferdeschwamme" portray similar horses.


For the construction of the Salzburg cathedral, rocks had been cut out from the mountain Moenchsberg. In 1693, Archbishop Johann Ernst von Thun decided to use this cavity in the mountain and he had a riding school built according to plans by Fischer von Erlach in which tournaments were held. It included 36 boxes chiseled from the rocks for the Archbishops and guests, and it was used as an open-air theatre for sport, dance and theater performances since the 18th century. The Horse Pond next to it was built in 1695 by von Erlach as a watering place for the Archbishop's riding stables.

Since 1926, the rock riding school has been used by the "Salzburger Festspiele". By the 18th century, Norik horses became important as work animals for farmers, but those horses which had been interbred with riding horses by the Archbishops were not as well suited for mountainous work and the more common type of less temperamental, heavy work horses were preferred in difficult terrain.

In time, these useful animals which had served as a riding, carriage, and work horse for knights, farmers and merchants in the Middle Ages evolved into the heavy alpine Norik horse, some of which would one day depart with their banished Protestant owners, bound for a long trek into unfamiliar lands.
Posted by Casey at 4:26 PM