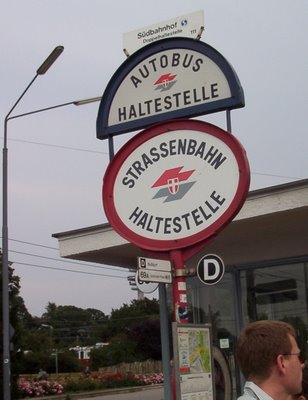 I took the tram to Strassenbahn like the kind man at the Weshbahnof tourist information desk had suggested. I requested the driver to inform me when we arrive at Belvedere. After riding on the tram for a while he announced that we had arrived at Belvedere. I thanked the driver and got off the tram.


The palace looked beautiful from far. But I couldn't enter the palace as it was closed to visitors. I had reached there much after the palace was closed. I was a little disappointed. 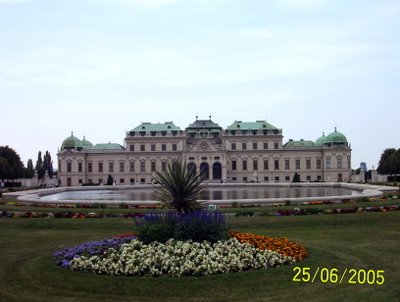 Then I thouhgt to myself... "Most of the palaces/castles in Europe look alike. I have been to quite a few of them in Scotland and England. I'm sure this palace too would be no different. The furniture might be different ... and the walls might have a different colored paint but that wouldn't make it any better than the palace at Mysore. Before I went to Windsor Castle I had heard that it was beautiful and one had to visit it while in England. But I was disappointed when I went there. It wasn't half as interesting as the palace in Mysore. It didn't have the grandiose that Indian palaces are famous for. So I believe I was better off seeing the palace from the outside."

History of Belvedere
Prince Eugene was a Frenchman and well-acquainted with Versailles though his parents were born in Italy. Spurned by Louis XIV, he became military commander of the Holy Roman Empire, and then 'the most grandiose and influential private patron in Europe'. Eugene was austere and taciturn, but a close friend and comrade of the Duke of Marlborough. They defeated Louis XIV's armies and were rewarded with palaces - one can compare the Belvedere with the original layout of Blenheim. The two generals were known as 'one soul with two bodies'. Eugene had bought land outside the medieval town after driving back the Turks' last assault on Vienna. All Europe rejoiced in its safety from 'the infidels'. Vienna developed a gay cosmopolitan society.

The Belvedere (means 'a place from which to see beauty') has a grand Upper Palace (built 1720-22) and a more comfortable Lower Palace (built 1714-16), where Prince Eugene lived. Gardens link the palaces, with elegant pools, fountains, sculpture, steps and cascades. Immaculate clipped maple hedges bring the sky itself into the design. The theme is man's journey from darkness to the divine light. 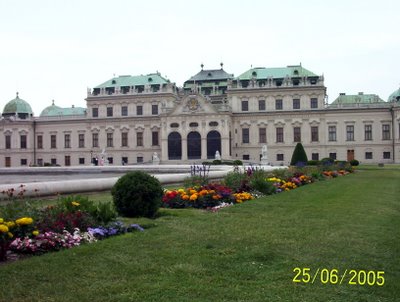 After Prince Eugene's death, in 1736, his estate passed to the Hapsburgs and continued to be used for social gatherings of pomp and circumstance. A 1731 set of engravings illustrated 'The Wonderful Home of the Incomparable Hero of our Time in Wars and Victories' much as they are today. Gothein II 164.

I took few pictures of the Upper palace. I wasn't even aware that the complex also had a lower palace when I was visiting. After returning to London I checked on the internet and learnt that there were two palaces - the upper and the lower. I visited only the upper palace. I checked the photos of the lower palace on the internet and I am glad that I did not visit :). It isn't half as beautiful as the upper palace and it also meant that I had to walk from the upper to the lower palace. I would have to spend another couple of hours to just see the not so attractive lower palace. Now that I think of it, I certainly feel that it was a wise decision to return. I spent more time at the Schönbrunn palace. Watching the setting sun from the palace was something to be remembered. I am sure I shall remember that for a long time.

As I was strolling in the palace garden, I saw two young couples (feels strange to read Two and couple together...??? I saw a black couple and white couple.... :).........and hence the words "two" and "couple".... together) having their wedding pictures taken. I'm not sure if they were married at Belvedere. But the photos would definitely make it look like they were married here :). Who wouldn't want to marry in this beautiful palace!!! 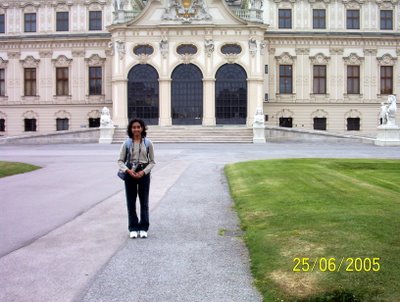 As I walked towards the exit I noticed a few birds that looked like crow. Having seen crows that are completely black (I haven't seen an albino crow yet ;)), this was bit of a surprise to me. While I stood there in doubt as to what this bird was, it started crowing :)) and that confirmed it definitely was a crow. 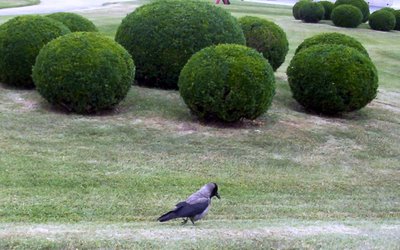 Oh Yes! It does look intriguing. I'm sure it would be from the inside too. It probably would require more than half a day for me to see the palace and I didn't have the luxury of spending that much of time in one city :(. If ever I do find time to visit Vienna I shall definitely see the palace apartments.