A native American saying holds:
"A pine needle fell. The Eagle saw it. The Deer heard it. The Bear smelled it" 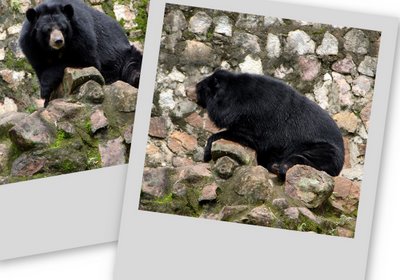 Asiatic Black Bear (Ursus Thibetanus) is also known as Tibetan Black Bear, The Himalayan Black Bear, The Moon Bear(because of the crescent moon shape on their chest). The characteristics of the bear are its black shiny fur with a distinctive white or cream 'V' marking on its chest. The fur around the shoulders and throat is particularly long and its ears are relatively large and set rather far apart. They have short claws measuring only 4-5 cm but are nevertheless good tree climbers. 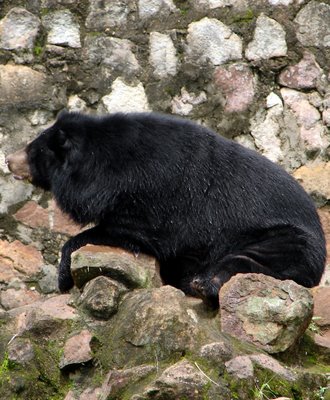 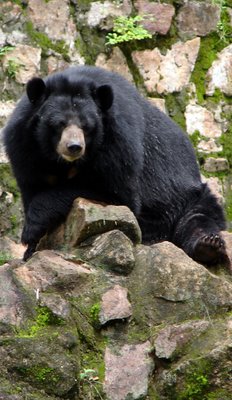 (If you click the picture on the right and enlarge it, you can see a tiny patch of cream on its chest)

Diet
They are carnivorous mammals. Their diet consists of small mammals, birds, fish, molluscs and carcasses. They also feed on grasses, berries, fruits, seeds, insects and honey. In autumn they fatten up for the winter by feeding on nuts.

Behaviour
They are solitary except for maternal family groups. They occupy a home range of 10- 20 Sq. Kms. They are mainly nocturnal (most active at night). In some areas they may be active even during the day. But this particular bear at "Nandan Kanan" park wasn't :(.
Hibernation
After building up a large fat store, the bears head into dens in late November and do not leave them until late March or early April. During hibernation, their heart beat drops to 8-12 beats per min compared to 40-70 in other bears. The metabolism also drops by half and its body temperature drops to only 3-7 deg. C. It also does not excrete urea or solid fecal matter while hibernating. While in other animals, this would cause poisoning, these bears transform the toxic substance into useable proteins. By the end of hibernation period, males lose 15-30% of their total weight while females lose upto 40%.

Reproduction
They mate from June - July and give birth during January and February. The female gives birth to 1-4 cubs that are born blind and helpless. They young, remain with the mother for a year or more.


Bile Bear
Bile Bear or Battery Bear is the term used for the Himalayan black bears that are kept in captivity in China and Vietnam to extract bile for use in Traditional Chinese medicines. 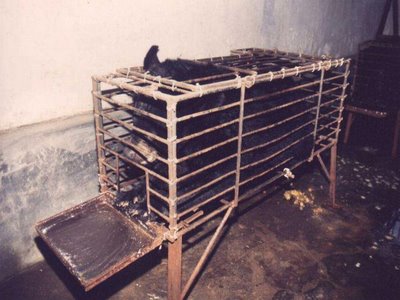 The Bile Bears live in cages that are slightly bigger than themselves. Bile is extracted through a cut made in the bear's abdomen and into the gall bladder. A tube is inserted into the opening to tap the bile or a steel stick is forced into the gall bladder with the bile running down into the basin. About 10 -20 ml of bile is tapped (milked) from the bear twice daily. The WSPA reports: "The investigators saw bears moaning, banging their heads against their cages and chewing their own paws while milking". Mortality rate is between 50% - 60%.

When the bears stop producing the bile after a few years, they are either moved to another cage where they are left to starve and die or killed for their paws and gall bladders. Bear paws are considered a delicacy.

Bear bile contains ursodeoxycholic acid (UDCA) that is used to treat fever, protect the liver, improve the eye sight, break down gallstones and act as anti inflammatory. Montreal based Axcan Pharma brought Ursodiol a commercial drug that is synthesized and not derived from animals to the market in 1998. They are as effective as the bear bile and Chinese traditional medicine practitioners should be encouraged to replace the bear bile with this medicine.
Posted by Casey at 11:53 AM