I went back to the same information desk at westbahnhof station and saw the same man who had helped me earlier. He looked surprised to see me. He probably thought I was still wandering in the station and was lost in the maze :).... I said

"Hello there. It’s me again. I need your help again."

"I would like to go to all these places. Could you please help me with the train numbers that I have to take?"

He smiled and said
"OK mam. Where would you like to go first?"

He tore off a sheet from one of the books and started writing the train numbers and the names of the stops where I had to get off. He turned the paper towards me and said "Ok. This is the first train. You take 'U3' the one that goes towards Simmering and get off at Burggasse.

You walk around the place and then you can take tram (don't remember the tram number now... but then I held on dearly :) to the sheet of paper the kind man at the station had given me and so knew which one to take) and reach the station ...(My grey cells have lost track of this as well :)....)

Then take tram D headed towards (sorry folks :)... if someone needs to go to Vienna I guess this will not be the right guide map for you :)... the people at the information centre are very friendly and you can just walk in and they will help you....) and get off at Belvedere.

Then you take the same tram headed in the opposite direction and reach Schonbrunn station.
After that you can walk back to your hostel from Schonbrunn.

I thanked him for all his help and walked towards the underground platform 2 to take the train to my first destination. I waited for 2 minutes and then the train arrived. I got on to the train and verified the city map that was displayed in the carriage and counted the number of stops before I reached Burggasse. 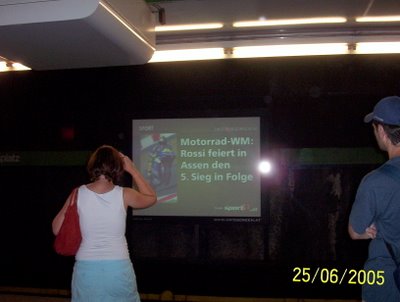 Television in one of the underground stations...

I walked out of the station and I didn't know which way to head. None of the direction boards were in English. I saw two women and walked up to them. Pointing at the circle marked as 1 I asked the women how I could reach that place. Neither of them spoke English. One lady looked at the map and then turned around pointed towards the road and said something in German. I understood that she meant "Go straight" then she pointed right and again said something in German. I knew she meant "go straight and turn right" then she made an action like drawing a straight line... I understood she meant... "the entire stretch of road". I thanked her and went off in the direction she had pointed.

I walked for 2 minutes and still nothing... nothing seemed interesting ... then I turned right and LO!!! There was a magnificent building there and all I could do was GASP! It was an amaaaaaaaaaazing building. I didn't know what the building was called. But it was amazing... I looked at the map and I knew I was on the Burg ring Opern Ring Kärntnerring road. So it had to be HOFBURG....wow!!! It was perhaps one of the most beautiful buildings I had seen... 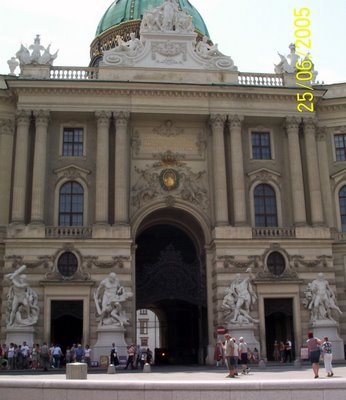 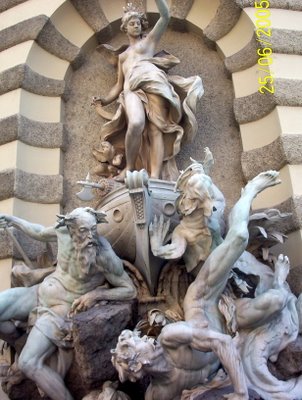 Hofburg palace and the fountain in front of the palace

The information I got on the internet about this place:

This is another one of Vienna's big attractions. And by big, we're talking scale. It encompasses six museums, a chapel, the president of Austria's offices, the national library, the famed Winter Riding School, a greenhouse, and a park. It will take two days to thoroughly see the place. 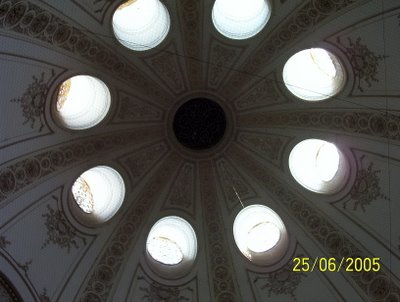 I don't know how many of you have seen the movie "Hum Dil De Chuke sanam". But the ceiling certainly reminded me of the song "Tadap tadap ke is dil se"... Not that the music hall in the Hofburg complex was on comparable scales to the one shown in the movie. But I just happened to remember the song. There were a couple of musicians playing some local music. I have probably recorded it on my camcorder.


The Hofburg Complex was built as the imperial home of the Habsburgs, and they lived there until 1918. The Kunsthistorisches Museum (Museum of Fine Art) has exhibits of ancient art, a collection of armor, even a collection of antique musical instruments. The Winter Riding School is where the Lipizzaner stallions are trained in the Spanish Riding School. It was designed by Josef Emanuel Fischer von Erlach, and built from 1729 to 1735. Inside two galleries surround the training ground, which is illuminated by two enormous chandeliers. But photography inside is not permitted. Most other buildings allow photography as long as the flash is turned off. There is also a butterfly aviary created out of greenhouses built from 1901-1907.

The Hofburg was originally a medieval castle, but today only the castle chapel remembers of its medieval past. The Hofburg was extended to a magnificent residence when the Habsburg's power increased.

That is the reason why one can find almost any architectural styles, from gothic style to art nouveau. Nowadays this enormous complex is the home of the "Österreichische Nationalbibliothek" (National Library), the "Schatzkammer" (Imperial Treasury), the Collection of Musical Instruments, the Collection of Weapons, the "Museum für Völkerkunde" (Museum of Ethnography) and the famous "Spanische Hofreitschule" (Spanish Riding School). Partly enclosed to the Hofburg one can find the vast "Heldenplatz" that is very impressive too. Equestrian statues of Archduke Karl, who won the battle of Aspern against Napoleon's troops (1809), and Prince Eugene of Savoy, who defeated the Turks, attest to Austria's glorious past.

As per the description one needs at least two days :) to see the entire place... and I hardly had 2 hours to spare. I know I didn't do any justice to this beautiful place by spending only about 2 hours there... but I had to go to other places as well.

I walked out of the hofburg building towards Österreichische Nationalbibliothek. I wasn't too keen on going into the buildings as I had very little time to spend at vienna. I walked further on and saw a couple of horse driven carriages. I was particularly fascinated by the horse driven carriages and if not for the hot day, I would have definitely ridden in one of them. 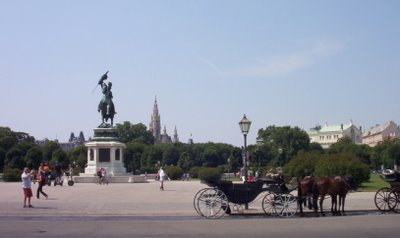 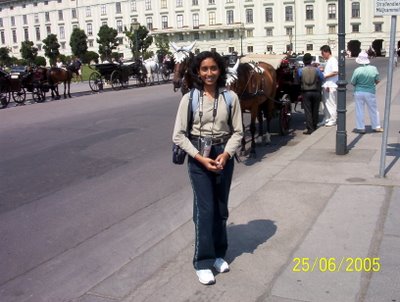 So I decided that it would be better to walk than to ride in the carriage and so unfolded my umbrella to shield myself from the fierce heat of the sun, took a couple of pictures in Robin's camera and went to garTen (Garden) to rest for a while in the cool shade.

Volksgarten is a public garden in the first district of Vienna next to the "Burgtheater". The garden has beautiful flowers and the interesting story about it is that there used to be a palace on the area, but had been destroyed with Napoleon's arrival. The Theseus Temple is located in the "Volksgarten". It was built in the 1930s. 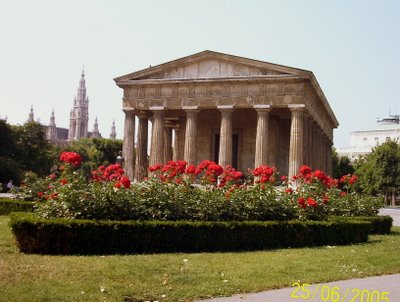 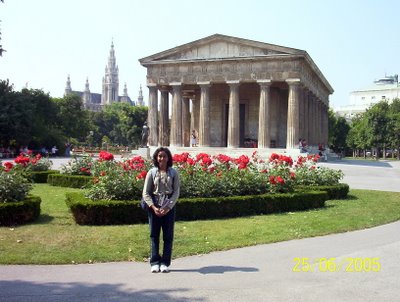 This isn't a very big garden. We have gardens that are definitely better than Volksgarten in Bangalore. But on that day I most certainly enjoyed sitting in the cool shade of the trees. There weren't too many different varieties of trees. I am not an expert on identifying the trees or the flowers. May be I could have taken a picture of one or two of them and asked Akash to translate the names for us in english :)... like he has translated "Basavana Paada" as "Cow's feet" :)...


It is a wonderful place to rest here on hot summer days. But beware!!! People spit bubble gums and chewing gums on the stairs and if you aren't too careful you might just sit on one of them like I did :) and then find it difficult to get rid of the gum.

I sat for a few minutes, pulled out the street map and then checked where I should be going next. Museum platz seemed interesting.

u r mamazing.. went to the city n then searched for the places to cisit n bus routes... applause!!
u sat on a bubble gum.. he he he... then what did u do ?

Vin, that was my first trip to Europe . So it wasn't very organised :) and sometimes, you get to see interesting places that are not even listed in the tourist information handbook :). So talking to the locals and finding out from them helps :)