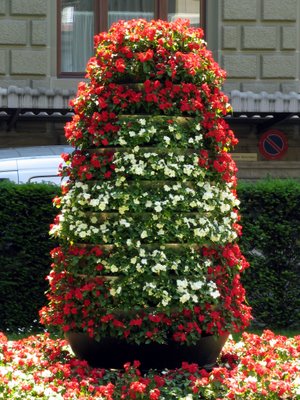 According to legend, late in the 12th century, the Duke of Zahringen sent his hunters into the woods and promised to name the city after the first animal that was brought to him. The bear was the first to be slain and since the 15th century the bear has served as the city's mascot.

Duke Berthold V of Zähringen founded the city on the River Aare in 1191 and allegedly named it after a bear (Bär in German) he had killed. It was made an Imperial Free City by the Holy Roman Emperor Frederick II in 1218 after Berthold died without an heir. In 1353 Berne joined the young Swiss Confederation, becoming a leading member of the new state. It invaded and conquered Aargau in 1415 and Vaud in 1536, as well as other smaller territories, thereby becoming the largest city-state north of the Alps. It was occupied by French troops in 1798 during the French Revolutionary Wars, when it was stripped of most of its territories. In 1831 the city became the capital of the Canton of Bern and in 1848 it additionally became the Swiss (administrative) capital. 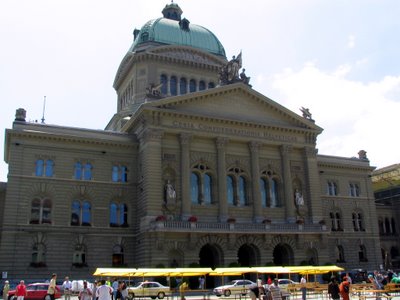 The Federal Assembly building was built in Renaissance style in 1902. It has "Curia Confoederationis Helveticae" inscribed on it. The building sits on a cliff edge above the river Aare. The Bundeshaus or House of Parliament, is the seat of Swiss Government. The oldest part of the building, the west wing, dates back to 1856. The central connecting portion of the structure that connects the East and the West wing was completed in 1902.

Switzerland is a federal republic and perhaps the closest state in the world to a direct democracy. For any change in the constitution, a referendum is mandatory; for any change in a law, a referendem can be requested. In practice, the people have the last word in every change of law some interest group disagrees with. 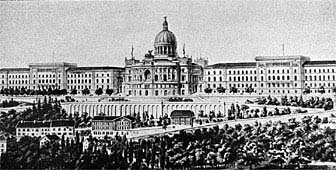 In the mid-1850s, plans were drawn up for a neo-Gothic structure which envisaged a building similar to the palace of Westminster in London. But eventually the design of Wilhelm Auer was approved.

Construction was carried out in accordance with the ideals of the Swiss federalism. The exterior is mostly sandstone from the quarries just outside Bern. Stone and other building materials from every region of the country have also been used. 30 artists from different parts of the country were commissioned to do the artwork.

Hidden secrets
When a large chandelier from one of the parliamentary chambers was taken down recently for restoration, it was found to contain documents written by restorers in the 1930s with their views about the approaching world war.

Like the building material used for construction, the restorers and the original construction workers represented most regions of Switzerland. Monica Bilfinger, an art historian at the federal building department rightly comments: "it is not just a house for the Swiss people, it's made by the Swiss people".
Posted by Casey at 7:57 AM